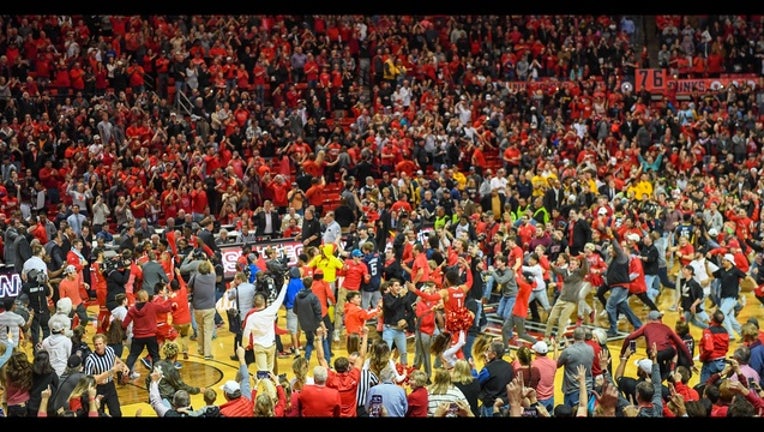 MORGANTOWN, W.Va. (AP) - The Big 12 fined Texas Tech $25,000 and reprimanded West Virginia forward Wes Harris for hitting a fan who joined thousands of others in storming the court during a weekend postgame celebration.

Big 12 Commissioner Bob Bowlsby said in a statement Monday that Texas Tech did not ensure the safety and security of West Virginia players following the game in Lubbock, Texas.

Videos posted on social media by fans show Harris and other West Virginia players trying to reach the sideline as Red Raider fans swarmed the court Saturday in celebration of No. 8 Texas Tech's 72-71 win over then-No. 2 West Virginia .

The videos show Harris striking a fan who had run into him before Harris is pulled away. Other players were involved in a separate skirmish trying to protect a teammate in the swarm.

"We have a duty to provide a safe game environment," Bowlsby said. "The Texas Tech Department of Athletics has a written event management policy, which was unsuccessful in ensuring the safety and security of the visiting team game participants."

Texas Tech got the win it its first-ever Top 10 matchup on its home court.

Bowlsby noted that although the Big 12 does not have a policy prohibiting spectators from entering the court for postgame celebrations, "it is of utmost importance that home game management provide adequate security measures for our student-athletes, coaches, game officials and spectators."

West Virginia athletic director Shane Lyons said WVU, the Big 12 and Texas Tech had a "positive and open dialogue" over the incident, and court security, player safety and postgame emotions were taken into account.

"We will revisit with our student-athletes to again reinforce our expectations regarding sportsmanship issues across all sports," Lyons said in a statement. "The Big 12 has issued its reprimand. We accept it, and I consider the matter closed."

Harris, a sophomore, is averaging 6.2 points and 4.6 rebounds off the bench.

"Although the post-game environment did not live up to our expectations, Mr. Harris intentionally striking a fan is contrary to the conference's sportsmanship standards," Bowlsby said.