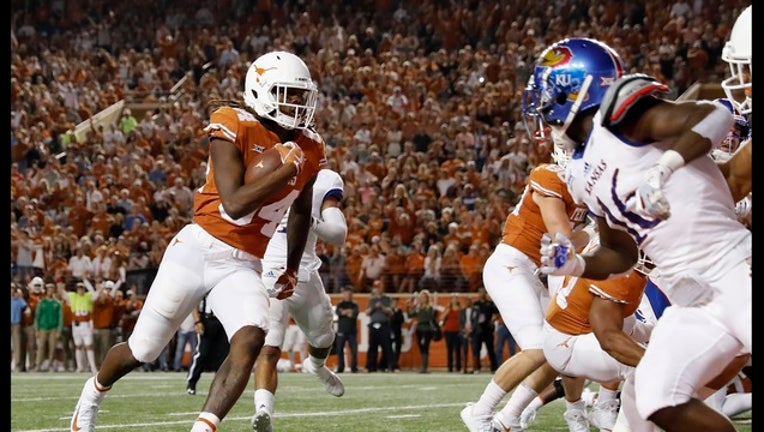 Lil'Jordan Humphrey #84 of the Texas Longhorns rushes for a touchdown in the second quarter against the Kansas Jayhawks at Darrell K Royal-Texas Memorial Stadium on November 11, 2017 in Austin, Texas. (Photo by Tim Warner/Getty Images)

AUSTIN, Texas (AP) - Texas has suspended three players for the Texas Bowl next week against Missouri, the latest challenge in an up-and-down season for first-year coach Tom Herman.

The Longhorns (6-6) are in danger of suffering their third straight losing season, the first two under coach Charlie Strong.

Humphrey and Carter were critical to the offense this season. Humphrey ranked second on the team in receptions with 37 for 431 yards. Carter gained 252 yards rushing with a 4.8 yard average. He made two starts but was then replaced by another freshman, Daniel Young.

Gary played sparingly, but Texas is very thin at tight end, a condition that became more severe when Chris Warren left the team after announcing that he plans to transfer. Nelson made 18 tackles in 11 games as a rotation player.

Herman already faced a shortage of players, too.

Still uncertain is the status of junior linebacker Malik Jefferson, a second-team All-American who has a turf toe injury.