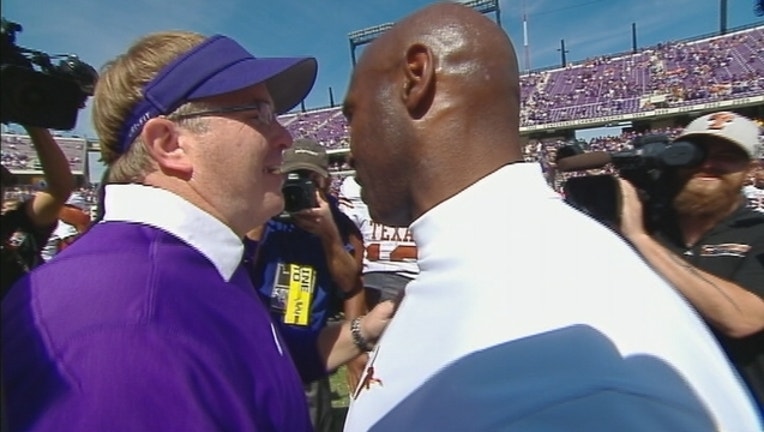 FORT WORTH, Texas (AP) — The Texas Longhorns narrowly avoided their worst shutout loss in more than 100 years. They've lost to TCU in consecutive seasons for the first time in almost 60.

And after a 50-7 loss to the fourth-ranked Horned Frogs on Saturday, coach Charlie Strong had to field questions about whether defensive back Kris Boyd was tweeting from the locker room at halftime.

It's not getting any easier for the once-proud and now-beleaguered program. Texas comes back to the Dallas area next weekend for the annual Red River rivalry against No. 15 Oklahoma.

"I know the day was awful. It was embarrassing," said Strong, in his second season of trying to rebuild after the program dropped off in the final few seasons under Mack Brown. "But we've just got to continue to coach."

The Longhorns (1-4, 0-2), plagued by special teams mistakes for the third straight game, scored a late touchdown to avoid matching the second-worst shutout loss in school history — 50-0 to Oklahoma 107 years ago. The worst was in 1904, by 68 to the University of Chicago.

Texas is off to its slowest start since going 1-9 in 1956, with consecutive losses to the Horned Frogs for the first time since 1958-59. Worse, though, the Longhorns have been outscored 98-17 by an old Southwest Conference opponent they once beat 24 straight times.

There was no such jovial banter for Strong, who said he wasn't aware of a retweet from Boyd's Twitter account involving an apparent Texas A&M supporter who suggested that he transfer. The tweet read, "Whenever ya'll (sic) are ready to transfer ... we're ready. #Gig'em."

While there's no reason to doubt the validity of Boyd's account, it wasn't clear whether he actually retweeted the item.

Boykin threw for 332 yards without playing in the fourth quarter, and his 74 career TD passes are three more than Cincinnati Bengals quarterback Andy Dalton had from 2007-10.

Two of them were to Josh Doctson, the latter breaking Josh Boyce's TCU career record of 22 from 2010-12.

The Horned Frogs had a 220-1 lead in total yards late in the first quarter after receiver Shaun Nixon threw a 29-yard scoring pass to Doctson on a trick play for a 30-0 lead.

A TCU defense missing six starters because of injuries and other issues slowed Jerrod Heard for the second straight week after two explosive games from the Texas freshman quarterback.

Heard was 8 of 20 for 48 yards and had 23 yards on 12 carries before getting replaced by former starter Tyrone Swoopes with TCU leading 47-0 lead in the third quarter.

The Horned Frogs came within 5 minutes of a shutout a week after giving up 607 yards when they beat Texas Tech 55-52 on a last-second tipped pass that running back Aaron Green caught in the back of the end zone.

Doctson and Turpin each had a flashy score. Doctson soared over Holton Hill on a leaping catch in the back corner of the end zone, and Turpin fooled safety P.J. Locke III with a cut inside from the sideline on a 49-yard score.

After special teams mistakes cost them chances to win late in losses to California and Oklahoma State, the Longhorns buried themselves with early blunders.

Kyle Ashby snapped the ball over punter Michael Dickson's head for a safety a week after Dickson dropped a perfect snap to set up Oklahoma State's winning field goal in the final seconds.

On the ensuing free kick, Nick Rose's kickoff went out of bounds, giving the Horned Frogs the ball at the 50. Five plays later, TCU went up 16-0 on a 15-yard pass to Doctson, who had seven catches for 129 yards.

"After every loss, everyone doesn't like a loss," Heard said. "So it is a bitter taste we have in our mouth. But we've still got to keep moving forward. We've got a big game next week."