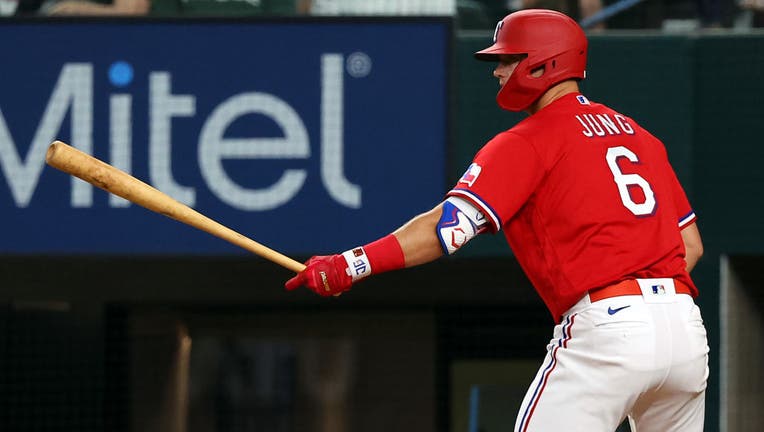 ARLINGTON, TEXAS - SEPTEMBER 09: Josh Jung #6 of the Texas Rangers bats in the seventh inning against the Toronto Blue Jays at Globe Life Field on September 09, 2022 in Arlington, Texas. (Photo by Richard Rodriguez/Getty Images)

Bichette homered for the fifth time in the last four games, but the Blue Jays got the deciding run on Danny Jansen’s RBI single in the ninth inning for a 4-3 win in Texas on Friday night, when top Rangers prospect Josh Jung hit a home run in his first career at-bat.

Raimel Tapia drew a leadoff walk in the ninth off Jose Leclerc (0-2), then stole second base after Santiago Espinal was unable to get a bunt down. Tapia moved up another base when Espinal hit a deep flyout before Jansen looped a single into shallow left-center field.

"A great walk, and stealing second base and the long flyball to move him over to third base, it made my job easier,'' Jansen said. ‘I just really simplified it at that point ... just trying to get something in play."

The Blue Jays maintained a 4 1/2-game lead over Baltimore. the first team below the American League’s three wild-card spots, with their 16th win in 22 games. They have won 13 of their last 15 road games, including three of four against the Orioles earlier this week.

"Things that are a little underrated are Jackie’s defense, and Tapia stealing a base there with two strikes to get in scoring position," Blue Jays interim manager John Schneider said. "So little things like that really helped us tonight."

Texas got even at 3-3 on Corey Seager's RBI double in the eighth inning, but he didn't score because right fielder Jackie Bradley Jr. made a running catch near the line of Jonah Heim's slicing flyball.

Bichette's 23rd homer was a two-run shot in the third inning that put the Blue Jays up 3-0. He also drove in a run with a fielder's choice grounder in the first, a ball that third baseman Jung fielded before making a backhanded flip on the run for a forceout at second base.

Tim Mayza (6-0), the fourth Toronto pitcher, got two outs in the eighth before Jordan Romano worked the ninth for his 32nd save in 36 chances. With a runner on second, the right-hander Romano struck out Jung and got pinch-hitter Adolis Garcia on an game-ending flyout.

The only runner allowed by right-hander Ross Stripling the first two times through the Texas lineup was Jung's homer leading off the third.

"I don’t even think I was conscious running around the bases. Just put a good swing on it," Jung said. ‘’Looking in my lane, and if a pitch showed up there, I was swinging. But I didn’t want to be too timid.''

Second baseman Marcus Semien had a two-out double in the sixth off Stripling to extend the longest active on-base streak in the majors to 20 games. Seager followed with an RBI single to snap an 0-for-25 slump for the All-Star shortstop.

Jung, the the eighth overall pick out of Texas Tech in the 2019 draft, is expected to finish this season as the primary third baseman for the Rangers. He might have earned that opportunity in spring training, but needed surgery in February to repair a torn labrum in his left (non-throwing) shoulder. He hit six homers in 23 games at Triple-A Round Rock the past month.

Bichette, who added a triple in the eighth before Brock Burke struck out consecutive batters, had three homers in the second game of a doubleheader Monday at Baltimore, then went deep again Tuesday.

The only other Texas batter to homer in his first MLB at-bat was Jurickson Profar at Cleveland in 2012. ... Jung is the seventh player to make his big league debut this season for the Rangers. He is the third player to do so at third base.

Stripling struck out four while allowing two runs over six innings in his 100th big league start — and 200th game overall. He threw only 68 pitches.

The retractable roof at Globe Life Field was open for the first time since a 3-1 win over Atlanta on April 30. The Rangers had played 54 home games in a row with the roof closed. It was 87 degrees at first pitch.

Blue Jays: OF Lourdes Gurriel Jr. was placed on the 10-day injured list with a left hamstring strain. Gurriel was hurt when hustling to beat out a double-play grounder in their series finale at Baltimore.

Rangers: García was out of the starting lineup for the second game in a row. He is still sore after coming down awkwardly when leaping at the wall on Jose Altuve’s homer in Houston on Tuesday night. ... .INF/OF Brad Miller was placed on the 10-day injured list with a right hip strain, creating an opening roster spot for Jung. Miller hadn’t played since Aug. 31.