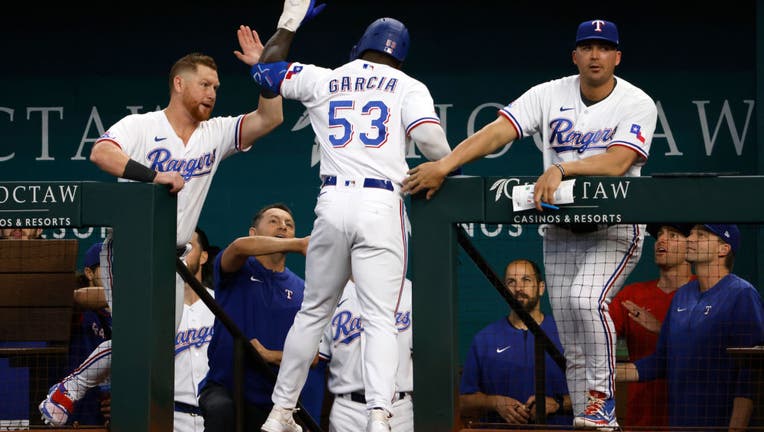 ARLINGTON, TX - JUNE 4: Adolis Garcia #53 of the Texas Rangers celebrates with teammates after hitting a three run home run against the Seattle Mariners during the fourth inning at Globe Life Field on June 4, 2022 in Arlington, Texas. (Photo by Ron J

The Rangers didn't have a base runner against Marco Gonzales (3-6) until Marcus Semien led off the fourth with a single grounded through the right side left open by shifted infielders. On the first pitch after Mitch Garver's one-out walk, Garcia went deep for a 3-0 lead with his ninth homer.

Barlow worked a perfect ninth for his 10th save in 11 chances. The right-hander was back on the mound less than 20 hours after Eugenio Suarez hit a two-run homer in the ninth inning of the series opener to give the Mariners a 4-3 win Friday night, ending Barlow's streak of 17 consecutive save chances converted going back to last season.

Otto (4-2) allowed only two hits over five innings. But the right-hander walked five and hit a batter in the first four innings when Seattle didn't get any of those runners home.

The Mariners got their runs when Jesse Winker hit a two-run homer in the fifth -- when he pulled a 446-foot blast into the right-center seats on a 3-1 pitch right after No. 9 batter Cal Raleigh had a one-out single in the fifth. Winker's third homer of the season came on Otto's 83rd pitch -- 42 strikes and 41 balls.

Gonzalez, in his 18th career start against Texas, struck out five and allowed three runs and five hits over seven innings.

Mariners: Manager Scott Servais said OF Kyle Lewis is still experiencing some concussion symptoms a week after getting hit by a pitch that went off his shoulder and then helmet. Lewis could come off the 7-day concussion IL as early as Sunday, but Servais said he is still resting and not expected back any earlier than next weekend after the Mariners return home. ... Servais said reliever Ken Giles (right middle finger) still has "got a few more outings ahead of him" in his rehab before his season debut. ... RF Mitch Haniger (high right ankle sprain), who has been out since end of April, has started slowly doing some baseball activity.

Rangers: 3B Josh Smith was put on the 10-day IL with a left AC joint sprain in his shoulder, and received an injection from team physician Dr. Keith Meister. Smith, who had reached base safely in 10 of his 17 plate appearances since his MLB debut Monday, hurt his shoulder diving for a ball on the infield Friday night.

Rangers LHP Martin Perez (4-2, MLB-best 1.42 ERA) makes his first start since being named the AL pitcher of the month for May. He has pitched at least six innings without allowing more than one earned run in eight consecutive starts, a club record. He hasn't allowed a homer this season. Mariners rookie right-hander George Kirby (1-1, 3.46) got his first MLB victory with six scoreless innings against Tuesday at Baltimore.