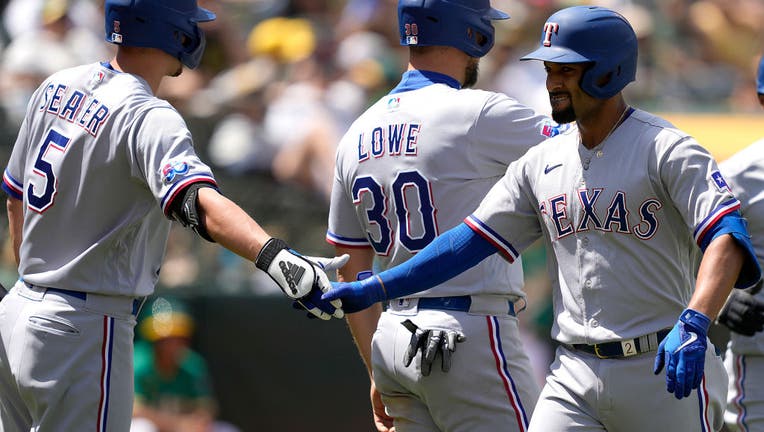 OAKLAND, CALIFORNIA - MAY 28: Marcus Semien #2 of the Texas Rangers is congratulated by Corey Seager #5 after hitting a grand slam home run against the Oakland Athletics in the top of the fifth inning at RingCentral Coliseum on May 28, 2022 in Oaklan

OAKLAND, Calif. (AP) - Marcus Semien hit a grand slam for his first home run after signing with Texas in the offseason, Corey Seager and Adolis Garcia added back-to-back shots and the Rangers routed the Oakland Athletics 11-4 on Saturday.

Texas had a season-high 18 hits, the most by the team since Sept. 8, 2019. The Rangers matched their longest winning streak of the season with their fourth straight. Seven players had multiple hits, including three with three each.

Semien played with Oakland from 2015-2020 and was an All-Star last season with Toronto before signing with Texas for seven years and $175 million. The 31-year-old had not homered since October before crushing an 0-1 pitch from Jake Lemoine over the wall in center field for his sixth career grand slam and fourth at the Coliseum. Semien also drew a bases-loaded walk in the sixth.

The Rangers won handily after taking the first two games of the series in their final at-bat. Texas took advantage of an overwhelmed A's bullpen after knocking Zach Logue out of the game in the third inning.

Ramon Laureano hit his first home run for Oakland, a solo drive off Taylor Hearn. The A's, who were managed by bench coach Brad Ausmus while Mark Kotsay attended his daughter's graduation in San Diego, have lost 10 of 14.

The Rangers are 5-1 against the A's this season after going 9-10 in the series last year.

Logue (2-4) left the game after allowing Nathaniel Lowe's RBI triple with two outs in the third. Earlier in the inning, Seager hit his ninth home run and Garcia drove the next pitch to left for his seventh.

A's reliever Justin Grimm was designated for assignment. The right-hander had a 4.11 ERA in 15 games this season. RHP Austin Pruitt was selected from Triple-A Las Vegas.

Rangers: 3B coach Tony Beasley was forced out of the game because of a tight Achilles tendon in his right leg.

Athletics: RHP Daulton Jefferies (thoracic outlet syndrome) plans to visit a specialist to get a second opinion next week.