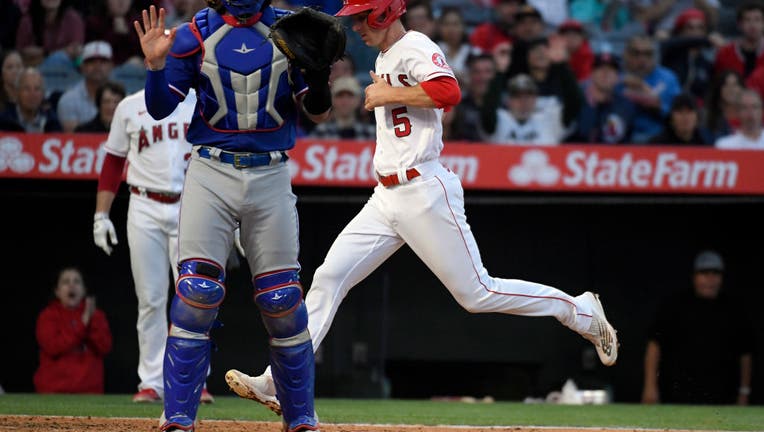 ANAHEIM, CA - MAY 24: Matt Duffy #5 of the Los Angeles Angels scores a run as catcher Jonah Heim #28 of the Texas Rangers looks on during the fourth inning at Angel Stadium of Anaheim on May 24, 2022 in Anaheim, California. (Photo by Kevork Djansezia

ANAHEIM, Calif. (AP) - Noah Syndergaard allowed one run over eight strong innings of four-hit ball in his longest appearance since returning from elbow surgery, and Jared Walsh homered in the Los Angeles Angels' 5-3 victory over the Texas Rangers on Tuesday night.

Luis Rengifo and Tyler Wade had RBI singles during a four-run fourth inning for the Angels, who have won three straight following a four-game skid that began with three losses in Texas last week.

Syndergaard (4-2) rebounded impressively from a poor outing at Texas last week by retiring the first 13 Rangers he faced at Angel Stadium. He shut out Texas until Jonah Heim's leadoff homer in the eighth, and he fell just short of his first complete game since May 2019 when he was pulled before the ninth.

"My last outing (stunk), and I knew I had to face the Rangers again," Syndergaard of last week's loss in which he didn't get out of the first inning in Arlington. "This time around, I had a chip on my shoulder and pitched with a little bit of attitude tonight. Tried to get the other guys involved, and the defense was stellar tonight. ... Just a really good team win, and we're having a lot of fun."

The performance was another highlight in the strong return from Tommy John surgery by Syndergaard, the imposing right-hander known as Thor. He didn’t walk a batter and never even got into a three-ball count while throwing 73 of his 93 pitches for strikes.

After the Mets made little effort to re-sign him last winter, Syndergaard landed a lucrative one-year deal in Orange County, where he has re-established himself as an elite starter, pitching into the sixth inning in six of his seven outings. He is 3-0 with a 1.48 ERA at the Big A.

Syndergaard got help from left fielder Brandon Marsh, who

"He was really good, and I thought he kept getting better," Angels manager Joe Maddon said. "I think he wanted to prove a point after his last start against these guys. I thought he was outstanding. ... He was on a mission."

Texas has lost three straight, but it rallied against Los Angeles’ bullpen in the ninth.

After Mitch Garver homered off Aaron Loup, Adolis García got credit for a two-out RBI double off closer Raisel Iglesias when Angels right fielder Tyler Wade couldn’t hold on to his sinking fly ball. Iglesias coolly struck out Heim to finish his 11th save.

Dane Dunning (1-3) struck out eight while persevering into the seventh inning for the Rangers despite yielding 11 hits.

"I was pretty happy with myself just to be able to get to that seventh inning," Dunning said. "It’s definitely a learning experience."

Los Angeles scored four runs on five hits and two defensive misplays by Texas during a ramshackle fourth-inning rally that began when García and Kole Calhoun allowed Walsh's leadoff fly ball to land between them.

In the fifth, Walsh added his ninth homer — his fourth off Texas this season, and his third in the last two games against the Rangers.

Heim finally got Texas on the board with his third homer against Los Angeles this season.

Slugging Angels outfielder Taylor Ward missed his third straight game with the aftereffects of a stinger incurred by running into the outfield wall last Friday. Ward is pain-free and improving, but the Angels won't play him in the field until his strength returns.

Rangers: RHP Albert Abreu returned from the injured list after a monthlong absence with a sprained left ankle.

Angels: Stassi played in his first game since May 8. The catcher spent two weeks on the COVID-19 list. ... RHP Griffin Canning has been shut down from throwing and will pursue a conservative rehabilitation from his back injury in an attempt to avoid surgery. The 2020 Gold Glove winner hasn't pitched this season, and he struggled last season before getting shut down in August with back problems.