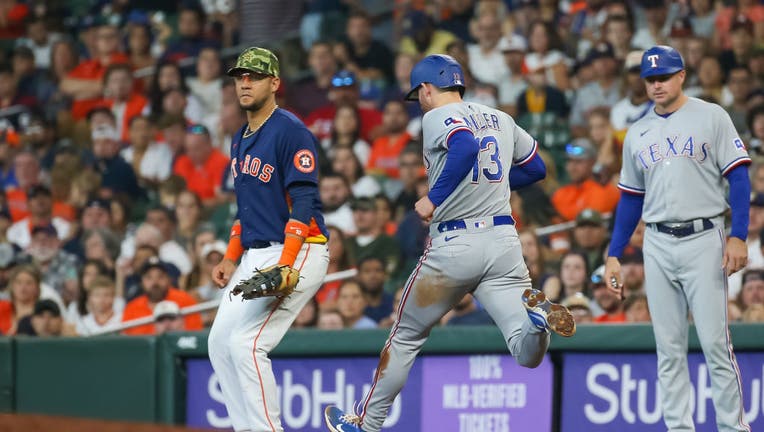 HOUSTON, TX - MAY 22: Texas Rangers third baseman Brad Miller (13) gets on base after bunting in the top of the fifth inning during the baseball game between the Texas Rangers and Houston Astros on May 22, 2022 at Minute Maid Park in Houston, Texas.

Urquidy (4-1) allowed six hits and one run in a season-high 6 2/3 innings as the Astros won for the third time in this four-game series. Urquidy improved to 4-0 in five career starts against the Rangers and has won three straight games overall.

Blake Taylor gave up a single to Kole Calhoun to start the ninth before plunking Mitch Garver. He was replaced by closer Ryan Pressly with one out and Sam Huff singled to load the bases. Brad Miller lined a single to center field to score Calhoun and cut the lead to 5-2.

But pinch-hitter Jonah Heim grounded into a double play to end the game and give Pressly his sixth save.

Altuve hit his fifth leadoff homer this season and the 26th of his career. He has nine home runs this season, and all but one of them have come this month.

Garver hit a solo homer for the Rangers that cut the lead to 1 in the top of the fifth, but Houston added two runs in the bottom of the inning to push the lead to 4-1.

Altuve's leadoff homer to the seats in left field gave the Astros an early lead.

There was one out in the third when Altuve doubled before Michael Brantley drew a walk. A double by Alex Bregman came next to score Altuve and make it 2-0.

Yordan Alvarez reached on a fielder's choice when Brantley was thrown out at the plate and Hearn retired Yuli Gurriel to end the inning.

Garver opened the fifth inning with his shot to left field to cut the lead to 2-1. Huff and Miller hit consecutive singles with one out, but Urquidy struck out Eli White before retiring Marcus Semien to leave them stranded.

There were two outs in the fifth when Hearn walked Bregman. Alvarez doubled to center field to score Bregman and chase Hearn and he was replaced by Brett Martin. Gurriel greeted him with a run-scoring double to push the lead to 4-1.

Miller singled with one on and two outs in the seventh to end Urquidy's outing. Miller was initially ruled out, but the Rangers challenged the play and it was overturned. Rafael Montero took over and struck out White to end the inning.

Rookie Jeremy Pena extended the lead to 5-1 with an RBI single in the eighth.

Astros: RHP Lance McCullers Jr., who has been out all season with a strained flexor tendon in his pitching arm, threw off the mound Sunday for the first time since he was injured during the playoffs last season. McCullers said he felt good and that it was an important step as he continues his recovery. There is no timetable for his return.

Rangers: Texas is off Monday before starting a two-game series against the Angels on Tuesday night with Dane Dunning (1-2, 3.92 ERA) on the mound.

Astros: Luis Garcia (3-2, 3.35) will start Monday night when Houston opens a three-game series with Cleveland. The Guardians haven't released their rotation for the series.