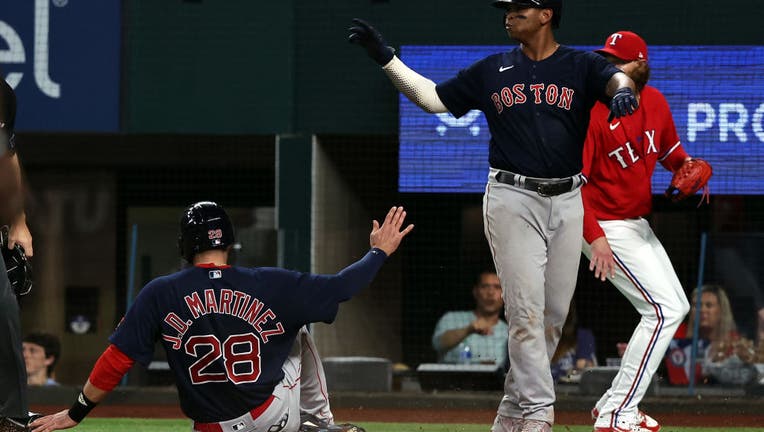 ARLINGTON, TEXAS - MAY 13: J.D. Martinez #28 slides home after Rafael Devers #11 of the Boston Red Sox scored against the Texas Rangers in the seventh inning at Globe Life Field on May 13, 2022 in Arlington, Texas. (Photo by Richard Rodriguez/Getty I

ARLINGTON, Texas (AP) - Nick Pivetta allowed a run and three hits in a season-long seven innings to win for the first time since August and the Boston Red Sox had a four-run sixth inning to beat the Texas Rangers 7-1 on Friday night.

J.D. Martinez began Boston’s big inning by lining a single to left field that skipped at Brad Miller’s feet. The hit extended Martinez’s hitting streak to 14 games and his on-base streak to 30 games to last September, both the longest active streaks in the major leagues.

Pivetta (1-4) ended a personal seven-game losing streak over 13 starts. His previous win was Aug. 13, 2021, over Baltimore. He struck out four and walked one. His shutout bid ended in the seventh inning when Kole Calhoun tripled to center and scored on a wild pitch.

Pivetta pitched six scoreless innings in his previous start last Saturday at home against the Chicago White Sox but came away with no decision in a 3-1 Boston loss. He walked two total batters in the two outings.

"Competitive in the zone, cutting down walks," Pivetta said. "A lot of early swings, which was really nice tonight. It allowed me to get deeper in the baseball game."

That was important with the Red Sox planning to have a bullpen game Sunday in the series finale.

"We needed him to go deep into the game," Boston manager Alex Cora said.

"Pivetta – he’s got a good fastball," Texas manager Chris Woodward said. "I know it doesn’t show up on the radar gun as 98 like some of the other guys, but his 92 plays like 95."

The Red Sox have won two of their last three games following a season-long five-game losing streak that put them in last place in the AL East.

Alex Verdugo and Franchy Cordero had RBI doubles in the sixth inning.

Xander Bogaerts came in leading the American League in batting and went 2-for-5, with two RBI, and raised his average from .345 to .347. That included legging out a broken-bat single to short early in the pivotal sixth inning.

Martinez added a ground-rule double in the seventh inning.

Dane Dunning (1-2) allowed one run on two singles going into the sixth. He left with two outs and was charged with a season-high five runs on six hits with six strikeouts, two walks and a wild pitch.

Dunning came off his only win of the season last Saturday at home, holding the world champion Atlanta Braves to one run over a career-high 7 2/3 innings.

First-year Red Sox second baseman Trevor Story grew up near Arlington in Irving and now lives in nearby Colleyville. His camp was in free-agent talks with the Rangers during the offseason before he signed with Boston for six years and $140 million in late March. That was months after Texas added middle infielders Corey Seager and Marcus Semien for a combined $500 million.

"Growing up here, everyone kind of thought it was a possibility," Story said of joining the Rangers. "But things worked out how they did, and I believe that’s for a reason, and I’m happy where I’m at."

Story, who hit four homers in six games at Globe Life Field while with Colorado, had a single and a sacrifice fly.

AS FOR OTHER STREAKS

Rangers 1B Nathaniel Lowe singled in the fifth to end an 0-for-22 drought. … Red Sox CF Kike Hernandez dumped a single into shallow right in the ninth inning to also snap an 0-for-22. Hernandez also scored following the first of his two walks and was hit by a pitch. … Texas 2B Marcus Semien went 0-for-4 and is hitless in his last 21 at-bats. … Rangers 3B Andy Ibanez is hitless in his last 19 at-bats after going 0-for-3.

Red Sox LF Alex Verdugo left the game in the seventh inning with a right-foot contusion after fouling off a pitch. X-rays were negative.

Red Sox: LHP Rich Hill (0-1, 2.86 ERA) rejoined the team on Friday and is expected to make his first start since May 5, being on the COVID list and then the bereavement/family medical emergency list.

Rangers: RHP Glenn Otto (1-0, 3.14) threw 86 pitches Sunday against the New York Yankees, the most of his two-year big-league career, and matched his career high throwing five innings in a game that Texas won 4-2.