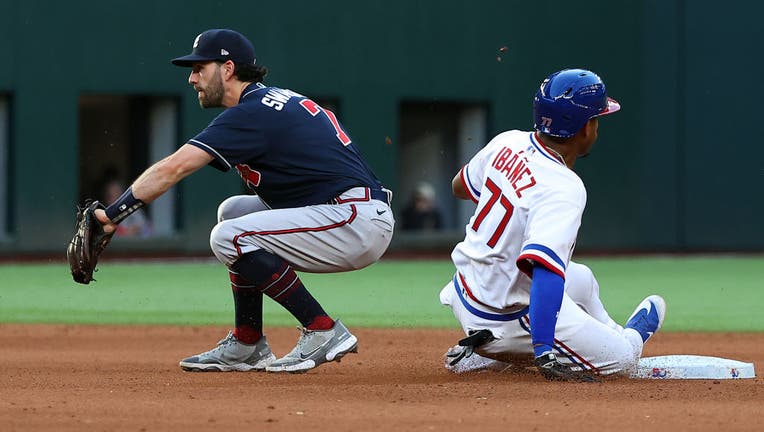 ARLINGTON, TEXAS - APRIL 30: Dansby Swanson #7 of the Atlanta Braves waits for the throw as Andy Ibanez #77 of the Texas Rangers steals second in the fourth inning at Globe Life Field on April 30, 2022 in Arlington, Texas. (Photo by Richard Rodriguez

"He smoked that ball," Rangers manager Chris Woodward said. "We felt better. The other team’s playing from behind right from the beginning."

Dunning (1-1) won for the first time since last Aug. 2, allowing three hits. He struck out five of Atlanta’s first seven batters and retired 14 straight before a one-out double in the eighth by Adam Duvall over the glove of left fielder Zach Reks, playing his first big league game this season.

Dunning left with runners on first and third with two out in the eighth. Dennis Santana retired Ronald Acuña Jr., playing his second game this season since being activated Thursday from the injured list, on a full-count grounder to shortstop.

Joe Barlow pitched a perfect ninth for his first save of the season.

Dunning’s seven strikeouts equaled a season high in making the longest start by a Texas starter this season. He’d struggled in first innings during his young career, with a 7.25 ERA and the most homers allowed of any inning (8).

He struck out the side looking in the first and had two swinging strikeouts among the first seven batters.

Dunning credited his change of mindset.

"Going in the first inning almost like I’m closing out the game," he said.

"You could see the intensity in the first inning," Woodward said. "It was like, ‘I’m coming at you.’ It just sets the tone in a lot of ways for our entire ballclub."

Bryce Elder (1-3), an Atlanta rookie right-hander who grew about 45 minutes north of Globe Life Field in Decatur, Texas, gave up all three runs on four hits and three walks over 4 1/3 innings in his fourth major league start. He struck out one.

The Braves failed to win a third straight game for the third consecutive time this season, leaving the defending World Series champions at 10-12. They haven’t been above .500 since being 2-1 on April 9.

Seager pulled an 0-2 inside cut fastball down the right-field line 406 feet for a two-out solo homer. It was his fourth home run of the season, and the three-game homer streak matches a career-high streak.

The Rangers also received RBI hits by two newcomers to the roster.

Sam Huff, who was recalled from Triple-A Round Rock on Thursday when Jonah Heim was placed on the paternity list, singled home Reks in the second inning.

Reks, who was recalled from Round Rock earlier Saturday, singled home Andy Ibanez in the fourth inning with his first big league hit. Reks had 10 at-bats with the Los Angeles Dodgers last season.

Acuna hit a check-swing bloop to shallow right field to score Travis Demeritte in the third.

OF Alex Dickerson cleared waivers and was outrighted to the Braves’ Triple-A Gwinnett affiliate after being designated for assignment on Thursday. … Texas optioned RHP Spencer Howard to Round Rock in addition to recalling OF Reks.

Elder had a sizable contingent of rooters among family, friends and the Decatur High baseball team. … The 2:15 game was the fastest Rangers game played in the two-plus seasons of Globe Life Field.

Rangers: RHP Jon Gray (knee) should return to the rotation early next week, probably Tuesday at Philadelphia. He has gone on the injured list after each of his first two starts, initially for a blister.

Braves: Manager Brian Snitker said afterward he hasn’t chosen a starter for Sunday afternoon’s series rubber game. "Anybody could be an option," he said.