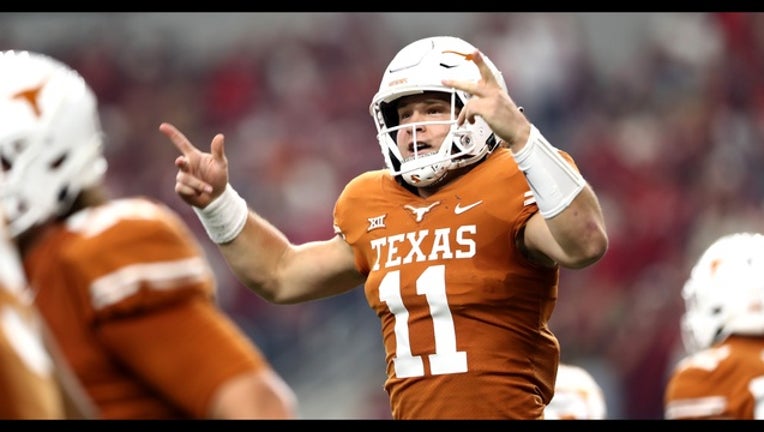 ARLINGTON, TEXAS - DECEMBER 01: Sam Ehlinger #11 of the Texas Longhorns celebrates his touchdown run against the Oklahoma Sooners in the first quarter at AT&T Stadium on December 01, 2018 in Arlington, Texas. (Photo by Ronald Martinez/Getty Image

Georgia was oh-so-close to knocking off top-ranked Alabama in the Southeastern Conference championship game and earning a spot in the College Football Playoff.

Instead, the Bulldogs must settle for an intriguing matchup against Texas in the Sugar Bowl on New Year's Day in New Orleans. It's the first time the powerhouse programs have played since squaring off in the Cotton Bowl on Jan. 2, 1984.

Georgia (11-2, 7-1 SEC) is led by D'Andre Swift and Elijah Holyfield, an impressive tandem of running backs who have combined for nearly 2,000 yards on the ground this season. The Bulldogs' only two losses were to LSU during the regular season, and the 35-28 loss to the Tide on Saturday.

Texas (9-4, 7-2) enjoyed a breakout regular season and has a chance to win 10 games for the first time since 2009. The Longhorns lost to Oklahoma on Saturday in the Big 12 championship game.

Here are some other things to know about the Georgia-Texas matchup in the Sugar Bowl:

Texas sophomore Sam Ehlinger has had an excellent year, throwing for 3,123 yards, 25 touchdowns and just five interceptions. His two favorite targets are Lil'Jordan Humphrey (6-foot-4, 225 pounds) and Collin Johnson (6-6, 220), who have the size and speed to potentially give Georgia problems.

Georgia's defense will need to keep its eyes on defensive lineman Charles Omenihu, who was an All-Big 12 selection after making 16 tackles for a loss, including 9½ sacks. The 6-6, 275-pound junior could create issues for Georgia quarterback Jake Fromm, who does many things well but is not considered a particularly mobile quarterback.

Fromm isn't often mentioned among the nation's elite quarterbacks, but against Alabama in the SEC championship he showed he can put up big numbers against an excellent defense. Fromm completed 25 of 39 passes for 301 yards and three touchdowns against the Tide.

Georgia's Kirby Smart and Texas' Tom Herman are widely considered some of the nation's top young coaches. Smart has a 32-9 overall record during his three seasons at Georgia, including back-to-back appearances in the SEC championship game and an appearance in last year's College Football Playoff title game. Herman is 16-10 in his second season with the Longhorns, including a 12-6 mark in Big 12 regular season games.

IN THE SUGAR BOWL