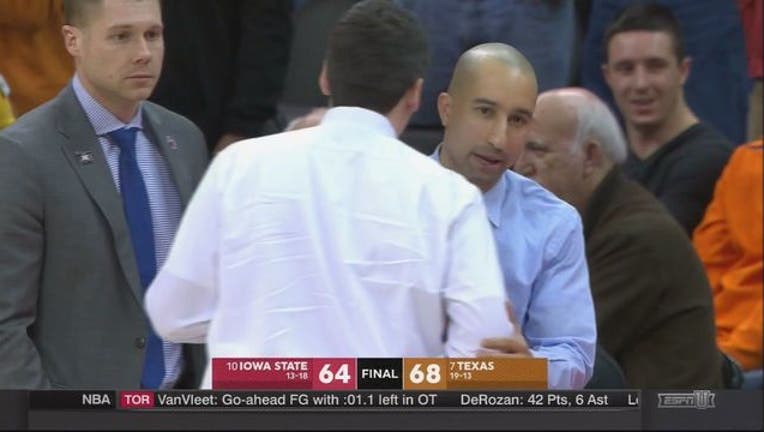 KANSAS CITY, Mo. (AP) - Dylan Osetkowski provided the points, Jericho Sims pulled down the rebounds and Kerwin Roach was the glue that held Texas together during its Big 12 Tournament win over Iowa State.

Which was altogether fitting, considering glue wound up holding Roach's tooth together.

The veteran guard took a wicked elbow to his mouth midway through the first half Wednesday night, sending half of his front tooth skittering across the floor. He got it glued together at halftime, came back to make some crucial plays down the stretch, and ultimately helped the seventh-seeded Longhorns to a 68-64 victory over the Cyclones at the packed Sprint Center.

"I had braces for a while and I thought all that money had gone to waste," said Roach, who had nine points, six rebounds and seven assists. "It didn't even hurt at the time. I just felt wind going through my mouth more than normal, and I looked down and saw a tooth at the free-throw line.

Better than losing an important game for his team's NCAA Tournament hopes.

Osetkowski had 20 points, Sims had 15 boards and Jase Fabres added 12 points for the Longhorns (19-13), who advanced to play second-seeded Texas Tech in Thursday's quarterfinals.

"We knew it was going to be a fight for 40 minutes tonight," Osetkowski said. "We wanted to focus on this one and I think the guys did a good job of it."

The Cyclones (13-18) forged a 58-all tie on a basket by Zoran Talley Jr. with 5 minutes left, but Matt Coleman started a run of six straight points that gave Texas a cushion. Coleman then scored again with 43.1 seconds left, giving the Longhorns a 68-64 advantage in the back-and-forth affair.

Lindell Wigginton turned the ball over on the Cyclones' next possession, ending any comeback.

Wigginton finished with 20 points and eight boards for Iowa State, but he also committed nine turnovers against two assists. Cameron Lard had 14 points and Talley had 12 points and nine rebounds.

"It's always a tough game when it's the last game and you have no postseason in front of us," Cyclones coach Steve Prohm. "We have to work so we aren't in this position next year."

The Cyclones, winners of three of the past four Big 12 Tournaments, looked in the opening minutes as if they had brought some of that Hilton Magic south on Interstate 35 once again. They slowly built a 28-18 lead, taking advantage of the Longhorns' cold outside shooting.

The game turned when Roach - missing half that tooth - returned to the floor. The Longhorns ripped off a 16-3 charge into halftime, where Roach had his tooth glued back together, and pushed the run to 22-3 early in the second half before the Cyclones finally got into a rhythm.

When they did, they relied on Wigginton on the outside and Lard on the inside, clawing their way back from a 40-31 deficit with a big run of their own that got a crowd full of red on its feet.

The Longhorns kept answering down the stretch, though, not only advancing to the quarterfinals but giving their rather shaky NCAA Tournament resume a chance to keep improving.

"We've been in so many close games, seven overtime games - a lot of close games that ended in regulation as well," Longhorns coach Shaka Smart said. "We tell our guys down the stretch, in a six-minute game, if you're solid on defense, take care of the ball and make your free throws it gives you a chance to win. We did enough of that."

Smart said freshman star Mo Bamba was "making progress" from his sprained toe but his status was still day to day. The 7-footer, who averaged 17 points and 14 rebounds against Iowa State this season, watched from the Texas bench in warmups. "We were hopeful he was going to be able to go tonight. He didn't," Smart said. "There's a possibility he can go tomorrow."

Iowa State committed 17 turnovers, most of them unforced, and that wiped out an otherwise solid shooting performance. It also wiped out the Cyclones' stingy defense, which held Texas to 8 of 31 from beyond the 3-point arc.

Texas survived without Bamba, setting up a showdown with the Red Raiders in the quarterfinals that would almost certainly lock up an at-large NCAA Tournament bid with a victory.

Iowa State heads back to Ames to begin working on next season.

Texas heads into Thursday night's quarterfinal against the Red Raiders.