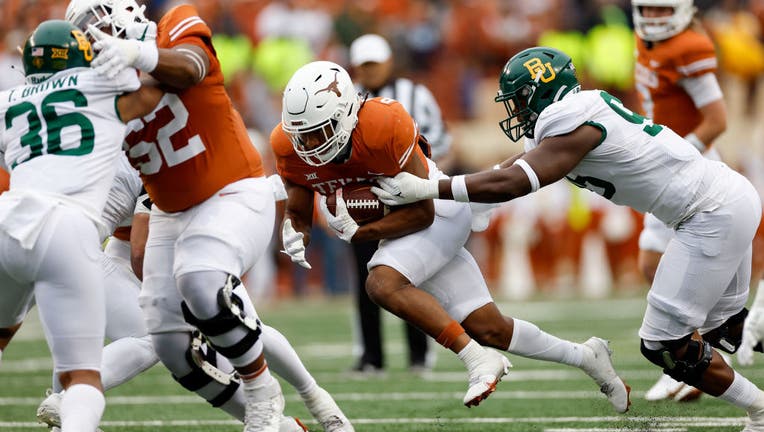 AUSTIN, TEXAS - NOVEMBER 25: Bijan Robinson #5 of the Texas Longhorns runs through a tackle by Gabe Hall #95 of the Baylor Bears in the fourth quarter of the Baylor Bears at Darrell K Royal-Texas Memorial Stadium on November 25, 2022 in Austin, Texas

AUSTIN, Texas (AP) - Bijan Robinson wouldn't say if he played his last college game on Friday. But if he did, the Texas junior made it a memorable one.

Robinson rushed for 179 yards and two touchdowns, Jaylan Ford made his fourth interception of the season, and No. 24 Texas defeated Baylor 38-27 on Friday.

The Longhorns (8-4, 6-3 Big 12) kept alive their chances of making the conference title game. If Kansas can beat No. 15 Kansas State on Saturday, Texas will face No. 4 TCU for the Big 12 championship.

Robinson carried 29 times, including 22 in the second half, when he gained 150 yards.

Texas ran on 22 straight plays after Baylor returned a fumble by quarterback Quinn Ewers for a touchdown early in the fourth quarter.

"We understood that we had to run it down their throats, because the pass game wasn't working so well in the first half," Robinson said.

The Longhorns outgained Baylor 266 yards to 56 in the second half.

On Baylor's next possession, Ford intercepted a pass by Blake Shapen, tying a Texas record for picks in a season by a linebacker. The Longhorns converted the turnover into a 42-yard touchdown drive, the final 11 on a run by Robinson's backup, Roschon Johnson, who hurdled a defender to reach the end zone. Johnson finished with 13 carries for 77 yards and two touchdowns.

Baylor trailed by five early in the fourth quarter when Ewers dropped back from his 33. A blitzing Al Walcott forced a fumble. Lineman Gabe Hall scooped up the ball and ran 16 yards for a touchdown. A 2-point conversion put Baylor ahead 27-24.

Baylor made a quick move toward ruining the Longhorns' senior day celebration. First the Bears pressured Ewers into a safety when he was flagged for intentional grounding in the end zone. Then Shapen connected with Jaylen Ellis for a 47-yard touchdown and a 9-0 lead midway through the first quarter. Ellis caught only one other pass this season before that one, a 50-yarder.

But Texas responded with a 75-yard touchdown drive that Ewers, not much of a runner, finished with a 3-yard burst up the middle. Baylor punter Issac Power contributed to the Texas cause with an 11-yard shank, and the Longhorns needed to only travel 29 yards for a second score.

There was an exchange of field goals, and a 45-yard Baylor touchdown drive that required just five plays and 32 seconds. Shapen finished with a 14-yard pass to tight end Ben Sims for a 19-17 halftime lead.

Texas put itself in danger with three false starts and a lost fumble by Jordan Whittington early in the third quarter. But a determined Whittington turned a short pass into a 19-yard gain, setting up a 1-yard score by Johnson late in the period.

"In the end, the story of this game is about resiliency," Texas coach Steve Sarkisian said. "Continuing to fight, and fight the right way."

Shapen went 18 of 36 for 179 yards, two touchdowns and an interception for Baylor, which lost its last three games after winning three in a row. The Bears produced a season-low 280 yards.

"We came into this game, all the way to the end, thinking we were gonna win," Baylor linebacker Bryson Jackson said. "So just a kick in the face. It hurts."

Baylor: The Bears were 5-1 against AP Top 25 teams last season, when they finished 12-2 and beat Oklahoma State in the Big 12 championship game. But this season Baylor is 0-5 against the Top 25, losing to No. 4 TCU last week on a game-ending field goal. "Last week, we had TCU on the ropes, and this week, we had an opportunity to close out a game and we couldn’t do it," Sims said.

Texas: The Longhorns, after two seasons of trying to sustain momentum under Sarkisian, now have some with their third victory in four games. They've already won three more games than they did in Sarkisian's first year. "It's easy to quantify the season with victories," Sarkisian said. "But I think the style of play is really starting to come to fruition. We're playing a physical brand of football."

Texas either awaits a bowl assignment or, if Kansas manages to beat its rival, prepares to face TCU in the Big 12 championship game on Dec. 3.