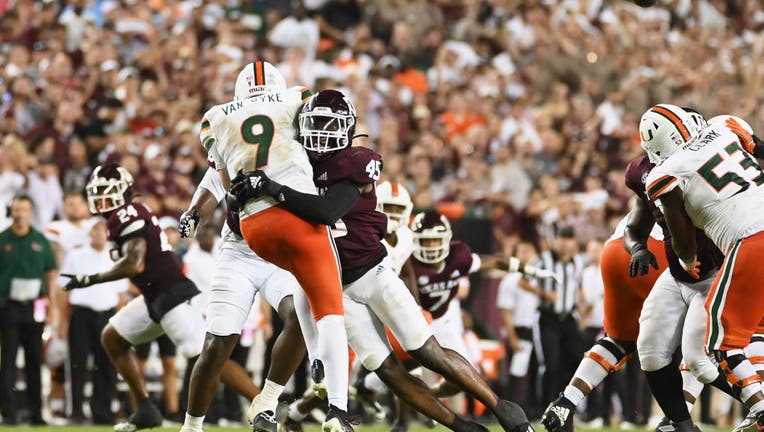 COLLEGE STATION, TEXAS - SEPTEMBER 17: Edgerrin Cooper #45 of the Texas A&amp;M Aggies tackles Tyler Van Dyke #9 of the Miami Hurricanes after a pass during the second half of the game at Kyle Field on September 17, 2022 in College Station, Texas

COLLEGE STATION, Texas (AP) - Looking for a way to get his team back on track after an upset last week, Texas A&M coach Jimbo Fisher benched quarterback Haynes King for Max Johnson, and the LSU transfer came through to help the Aggies down the Miami on Saturday night.

"We've still got to get a heck of a lot better on offense," Fisher said. "But I thought that was what was best for us to win the game and that’s what we did."

Fisher was asked if the victory Saturday could be a boost to his team as it opens SEC play next week.

"It was a shot we needed," he said. "We didn’t need another shot the other way."

Miami (2-1) was down by 8 and had to punt after two holding calls stalled a drive with about three minutes left. The Hurricanes had a shot to get the ball back when Ainias Smith fumbled the punt on the 12. But he pounced on the ball before Miami could get to it to allow A&M to keep the ball.

The Hurricanes got the ball back again after that, but Brashard Smith dropped a pass on fourth-and-4 with about 30 seconds left to allow the Aggies (2-1) to run out the clock for the victory.

"We showed a lot of guts, a lot of heart," Fisher said, adding blocking out the outside noise was the key to being able to rebound this week.

Dropped passes were a theme of the night for Miami as the team struggled without star receiver Xavier Restrepo, who missed the game with a foot injury. Tyler Van Dyke had 217 yards passing, but couldn't get the Hurricanes in the end zone.

Devon Achane had 88 yards rushing and extended the lead to 17-3 with about 10 1/2 minutes left in the third quarter when he grabbed a short pass and shed four defenders en route to a 25-yard score.

The Hurricanes, who scored 100 points combined in their first two games, moved the ball well at times, but could not convert in the red zone, settling for field goals again and again as they lost for the first time under new coach Mario Cristobal.

"We've got to get better," Cristobal said. "We showed that we can compete in a difficult environment, but competing in itself is just not enough. You've got to execute. You've got prevent shooting yourself in the foot on some things."

Cristobal said after the game that Restrepo will miss at least six weeks with his foot injury.

Johnson, who was the starter at LSU last season before transferring to A&M, wasn’t great, completing just 10 of 20 passes. But he seemed to give the Aggies a shot in the arm after last week’s loss sent them tumbling from No. 6 to No. 24 in the AP Top 25.

"The players around me made a lot of great plays... I think it was just an overall great team win," Johnson said.

Smith had four receptions for 74 yards to help the Aggies to the win in front of a crowd of 107,245, which was the third-largest crowd in Kyle Field history and the largest for a non-conference game.

The Aggies lost two players in the secondary in the first quarter because of targeting penalties. Cornerback Brian George was ejected with about 3 1/2 minutes left in the period for a hit on Henry Parrish.

Safety Demani Richardson was kicked out for a hit on Michael Redding III after a catch just before the end of the quarter.

Borregales, who missed a 49-yard field goal attempt in the first quarter, had one from blocked from 36 yards with about 11 1/2 minutes left in the second.

It was tied after the teams exchanged early field goals Tyrique Stevenson muffed a punt and it was recovered by Chris Russell on the Miami 25.

Texas A&M cashed in on the mistake three plays later when L.J. Johnson scored on a 1-yard touchdown run to make it 10-3. Achane set up that score with a 22-yard run on the previous play.

Johnson looked much more confident and comfortable leading the offense than King has this season and should improve with more time as the starter.

The Hurricanes must find a way to finish off drives after failing to score a touchdown Saturday night.

The Aggies could move up a couple of spots after rebounding against the Hurricanes. Miami will certainly drop in the rankings after its first loss of the season.

Texas A&M: Meets No. 10 Arkansas next Saturday night in Arlington, Texas in the first of four straight games away from home.