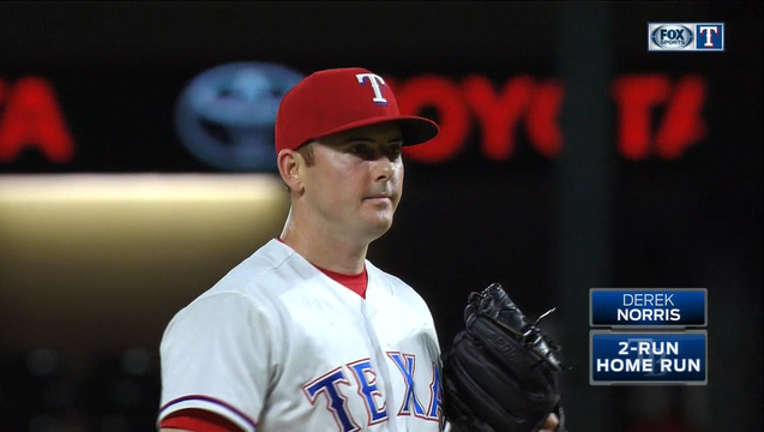 ARLINGTON, Texas (AP) - It just took an extra inning for the major leagues' leading home run hitting team to look like itself.

Logan Morrison and Derek Norris homered in a three-run 10th inning to cap a late Tampa Bay comeback as the Rays beat the Texas Rangers 7-5 on Wednesday night.

Kevin Kiermaier tied the score with two outs in the ninth inning with a first-pitch home run off Texas closer Matt Bush.

"That was the most fun I've had on the field all year, being part of that," Kiermaier said.

"We've been saying it now for a week, the way these guys have just been responding to adversity and finding ways to win ballgames," Tampa Bay manager Kevin Cash said.

The Rays arrived in Arlington having beaten the Minnesota Twins on Sunday in 15 innings after scoring twice in the ninth.

Austin Pruitt (4-1), recalled from Triple-A Durham earlier in the day, earned the win with two hitless innings. Alex Colome gave up one run in getting his 15th save with a game-ending double play.

The 10th-inning homers came off Sam Dyson (1-6), who began the season as Texas' closer. Dyson has a 10.50 ERA and four blown saves to go with the six losses.

When Rangers manager Jeff Banister was asked what's wrong with Dyson, he said, "If we had those complete answers ."

Elvis Andrus had three hits and two RBI, including Texas' go-ahead run in the seventh inning.

Andrus drove in Shin-Soo Choo, who reached on a fielder's choice on a putout at the plate and then stole second base. Pete Kozma was thrown out, pinch-running for Mike Napoli, who led off the seventh with a double when the ball popped out of the glove of Kiermaier near the top of the wall in center field.

Souza's homer came off Austin Bibens-Dirkx, who made his first major league start at age 32 following 12 seasons in the minors. Bibens-Dirkx, who previously made four relief appearances after joining Texas on May 7, allowed three runs in 4 2/3 innings.

"Overall, I felt like I went out there and competed and kept the team in the game," Bibens-Dirkx said. Of Souza's 455-foot blast to left field, he said, "He hit it really far, something they do in this league. It's a mistake I'll learn from."

"That was right up the middle (of the plate), and I had that slow bat speed," Morrison said, smiling.

MILES TO GO BEFORE

The Rays are two-thirds of the way through a nine-game trip that began in Minnesota and will end in Seattle, covering an estimated 6,389 miles from Tampa-St. Petersburg. They will be off Thursday after playing 33 of 34 days.

"We're looking forward to the off day for sure," Cash said. "It's going to help a lot of guys to just relax, lay around, not pick up a baseball."

The Rays improved to 3-24 when trailing after eight innings and are 4-0-1 in their last five series. . 3B Adrian Beltre, who made his season debut on Monday after missing Texas' first 51 games with a calf injury, moved into 18th place in career doubles with No. 593. . The Rangers, AL West winners in 2015-16, are a season-worst 12 games behind the first-place Houston Astros. . Archer has 21 straight starts with triple-digit pitch counts.

Rangers: The next rehab start for RHP Tyson Ross (Thoracic Outlet Syndrome) will be Saturday for Triple-A Round Rock.

Rays: RHP Jake Odorizzi (3-2), who allowed season highs with seven hits and four walks last Saturday in a no-decision at Minnesota, will begin the three-game series at Seattle.

Rangers: RHP Yu Darvish (5-3) will open a three-game home series against the Astros having gone winless in his last seven starts against Houston.