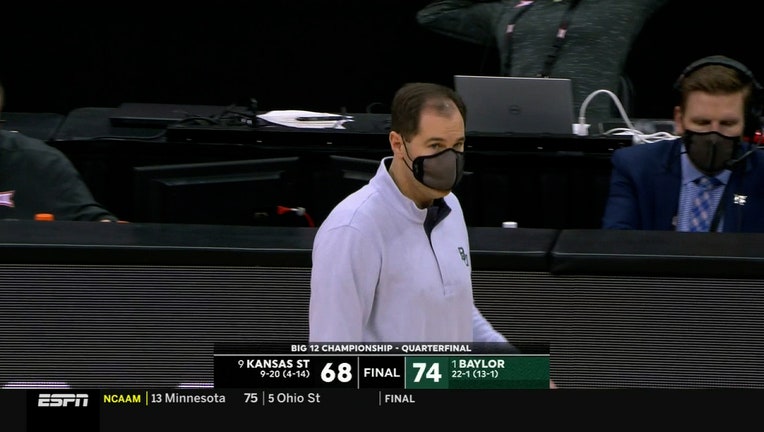 KANSAS CITY, Mo. - MaCio Teague scored 24 points, Davion Mitchell added 23 and second-ranked Baylor held on to beat Kansas State 74-68 on Thursday and avoid what would have been one of the biggest upsets in the history of the Big 12 Tournament.

The top-seeded Bears (22-1) rolled into T-Mobile Arena after their first regular-season conference title since 1950 and with a No. 1 seed in next week’s NCAA Tournament nearly locked up.

Yet the Wildcats (9-20), who lost their two regular-season games to Baylor by an average of 40 points, never allowed the high-powered Bears to slip away. They trailed by four points with just over a minute to go, but Jared Butler made a couple free throws to seal the win.

It sent Baylor into a semifinal matchup with No. 12 Oklahoma State on Friday night.

The Buckeyes (19-8) snapped a four-game losing streak and advanced to face No. 21 Purdue in Friday’s quarterfinals.

Marcus Carr scored 24 points and Jamal Mashburn Jr. finished with 18 to lead Minnesota (14-15), which lost for the eighth time in nine games.

Ohio State struggled to put this one away late — despite having a seemingly safe 70-56 lead with 3:24 to go. The Gophers cut the deficit to 75-74 on Carr’s 3-pointer with 13.3 seconds to go before Ohio State finally sealed it at the free-throw line.

KANSAS CITY, Mo. (AP) — Avery Johnson III hit the go-ahead bucket for Oklahoma State with less than a minute to go, and Sean McNeil’s tying 3-pointer came a split-second after the final buzzer, allowing the Cowboys to escape West Virginia in the Big 12 Tournament quarterfinals.

Anderson and Big 12 player of the year Cade Cunningham had 17 points apiece for the fifth-seeded Cowboys (19-7), who have won seven of their last eight games — including two against the Mountaineers — with the only loss to No. 2 Baylor.

Isaac Likekele and Bryce Williams each added 10 points to help the Cowboys reach the semifinal round.

KANSAS CITY, Mo. (AP) — Ochai Agbaji scored a career-high 26 points, Marcus Garrett added 17, and Kansas held on after blowing most of a 20-point halftime lead to beat Oklahoma in the quarterfinals of the Big 12 Tournament.

Mitch Lightfoot added 11 points for the No. 2 seed Jayhawks (20-8), who played without big man David McCormack and backup forward Tristan Enaruna, both of whom were caught up in COVID-19 protocols leading up to the tournament.

The seventh-seeded Sooners (15-10) trailed 35-15 at halftime, but they managed to close within 62-59 with 3 1/2 minutes to go when Elijah Harkless followed a miss by Austin Reaves with a bucket of his own. But the Sooners didn’t get another field goal to go until the final minute.

Kansas will play No. 13 Texas in the semifinals Friday night.

KANSAS CITY, Mo. (AP) — Matt Coleman scored 19 points, including the go-ahead free throws with 1.8 seconds left, and Texas rallied in the closing minutes to beat Texas Tech in the quarterfinals of the Big 12 Tournament.

Jase Febres finished with 15 points, Andrew Jones added 11, and Jericho Sims and Kai Jones had 10 apiece for the Longhorns (18-7).

The sixth-seeded Red Raiders led 66-61 before baskets by Kai Jones and Coleman got third-seeded Texas within a point with less than a minute to go. In the final seconds, coach Shaka Smart drew up a play for Coleman, who drove to the basket, was fouled and calmly hit both free throws.