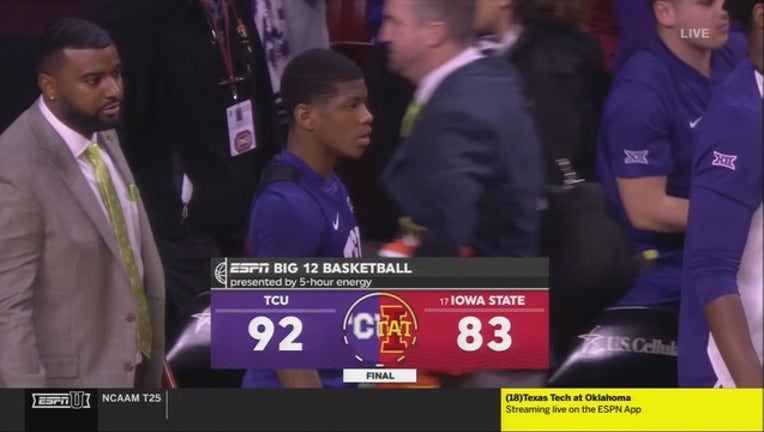 Kouat Noi, Desmond Bane and Alex Robinson each had 17 for the Horned Frogs (17-6, 5-5 Big 12). They used a staggering 27-4 first-half run to blow past the beleaguered Cyclones and greatly boost their NCAA Tournament chances.

TCU, a 9-point underdog that had lost its previous two road games by an average of 22.5 points, capped a stretch of seven straight makes to open the second half with a layup by Noi to jump ahead 54-36 with 15:32 left.

Iowa State went on a late 10-0 run, but TCU had answers for everything the Cyclones threw at them.

Marial Shayok scored 24 points and Michael Jacobson had 16 to lead the Cyclones (18-6, 7-4), who saw their winning streak snapped at four games.

Iowa State missed 12 of its first 13 3s, falling into a hole that was too deep to climb out of.

Iowa State: The strangest thing about TCU's first-half run was that the Cyclones got a ton of good looks at the basket, but good shooters simply weren't knocking them down. Iowa State's Big 12 title hopes took a hit, though a win at Kansas State next weekend would make up for it. For that to happen, the Cyclones will need to find the defense that abandoned them on Saturday.

TCU: The Horned Frogs had been terrible on the road pretty much all season, so to watch them dismantle Iowa State in one of the nation's toughest gyms was stunning. This was a reminder that TCU's ceiling is quite high.

Iowa State will likely stay in the rankings after beating Oklahoma on the road on Monday, but it'll slide down at least a few spots.