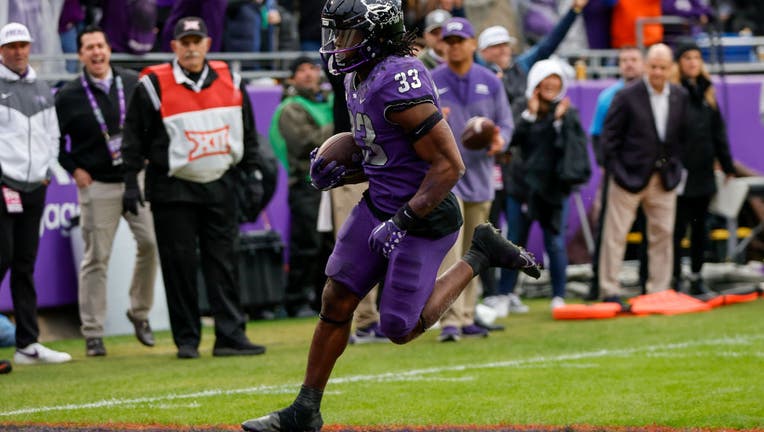 FORT WORTH, TX - NOVEMBER 26: TCU Horned Frogs running back Kendre Miller (33) scores a touchdown during the game between the TCU Horned Frogs and the Iowa State Cyclones on November 26, 2022 at Amon G. Carter Stadium in Fort Worth, Texas. (Photo by

FORT WORTH, Texas (AP) - Kendre Miller ran for two touchdowns as fourth-ranked TCU completed the first undefeated regular season by a Big 12 team since 2009 with a 62-14 victory over Iowa State on Saturday, getting the Horned Frogs closer to making the four-team College Football Playoff.

Max Duggan threw TDs to three receivers for the Frogs (12-0, 9-0 Big 12, No. 4 CFP), who still have the Big 12 championship game to play next Saturday in coach Sonny Dykes' first season. But they will go into that as one of only three undefeated teams remaining.

A week after having to score nine points in the final 2 minutes, 7 seconds at Baylor, and getting the game-ending field goal when out of timeouts and the clock running, TCU led 17-0 with scores on each of its three drives against the Big 12's top defense.

The Frogs led 24-0 at the end of the first quarter on Millard Bradford's 36-yard interception return for their first defensive touchdown this season. Josh Newton added another one with his 57-yard pick and score after halftime.

It was the most-lopsided loss for Iowa State since 55-3 in the regular-season finale at TCU in 2014, the inaugural season for the four-team playoff and when there was no Big 12 title game.

One-loss TCU went into that game No. 3, but dropped to sixth in the final CFP rankings the next day. That was one spot below one-loss Baylor, the only team to beat the Frogs. Ohio State was fourth after a 59-0 win in the Big Ten title game.

Miller's 25-yard TD run in the first quarter marked his 13th consecutive game with a rushing touchdown, the nation's longest active streak. He added a 1-yard score, his 16th of the season, on fourth down at the end of the first half for a 34-7 lead.

Duggan hit a wide-open Geor'Quarius Spivey for a 19-yard TD pass on fourth-and-2 on the game's opening drive. Duggan finished 17 of 24 for 212 yards.

The last time the Frogs got this deep into a season undefeated was 2010, then in Mountain West, when they finished 13-0 and with a No. 2 national ranking after winning the Rose Bowl.

That was a year after Texas finished the regular season undefeated, won the Big 12 title game and then lost in the BCS National Championship Game. Oklahoma was undefeated in Big 12 games in 2016 after starting 1-2 in non-conference games.

Iowa State: The Cyclones had allowed 24 points combined in the first quarter of their previous 11 games. ... It is their first losing record since 3-9 in coach Matt Campbell's debut in 2016 after taking over a team coming off six consecutive losing seasons.

TCU: Miller and WR Quentin Johnston (lingering ankle injury) missed the end of the chaotic comeback against Baylor. Miller was back after taking a shot when blocking early in the second half of that game, though Johnston didn't play the regular-season finale on the damp turf. Duggan completed passes to 10 different Frogs.

With No. 2 Ohio State's 45-23 point home loss to No. 3 Michigan, the Horned Frogs should move up a spot in the new AP poll Sunday. That could also be the case in the new CFP rankings Tuesday.

Iowa State: The Cyclones play their 2023 season opener at home vs. Northern Iowa on Sept. 2

TCU: The Frogs only have to go about 20 miles from campus to play the Big 12 championship game at AT&T Stadium next Saturday.