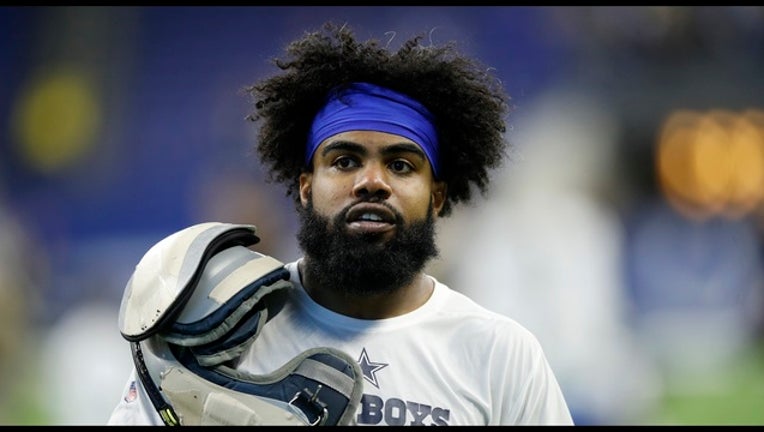 INDIANAPOLIS, INDIANA - DECEMBER 16: Ezekiel Elliot #21 of the Dallas Cowboys walks off the field after a loss to the Indianapolis Colts at Lucas Oil Stadium on December 16, 2018 in Indianapolis, Indiana. (Photo by Joe Robbins/Getty Images)

ARLINGTON, Texas (AP) - Ezekiel Elliott and the Dallas Cowboys failed in their first attempt to wrap up the NFC East by losing to Indianapolis when the Colts badly needed a win for their playoff chase.

Now the NFL's rushing leader and his teammates will try again Sunday, this time facing an opponent with nothing on the line a week after Tampa Bay was eliminated from postseason contention with a loss in Baltimore.

"I think everyone in this locker room understands how important this game is," Elliott said with Dallas coming off the franchise's first shutout loss in 15 years . "I think it would be kind of beating a dead cow to come in here and harping on what happened last week."

Jameis Winston and the Bucs (5-9) are putting the wraps on a strange year that began with the quarterback's personal-conduct suspension, followed by his inability to keep the job once Ryan Fitzpatrick cooled off.

Fitzpatrick's struggles gave him another shot, and Winston is set for his fifth straight start, the longest stretch for either QB this year.

"Even though we're out of contention, it still feels good to win," said receiver Mike Evans, a bright spot for an offense that had little trouble churning out yards but often didn't turn them into points. "Christmas is coming up. It'll be good to have Christmas sitting on a 'W.'"

The Cowboys (8-6) just want to end their division race.

Dallas ran off five straight wins to earn the enviable position of needing one victory in the final three games to reach the postseason for the second time in three seasons with Elliott and quarterback Dak Prescott, the NFL Offensive Rookie of the Year on a playoff team two years ago.

Moving the ball wasn't a problem for the Cowboys in the first half of the 23-0 loss to Indianapolis, but they squandered several scoring chances. A defense that has carried Dallas most of the season had the bigger letdown in the second half.

The Cowboys can win the division with another loss if Washington and Philadelphia lose. They don't want to go there.

"Guys were excited to get back there and get rid of that last game and kind of build from scratch and kind of build our swag back," said cornerback Byron Jones, who was voted to his first Pro Bowl this week. "I know we're going to come out feisty and fierce."

Things to consider as the Cowboys try to build on a 9-1 home record in the series with the Bucs, 11-1 if you include two playoff wins in the 1980s:

Elliott and Todd Gurley of the Los Angeles Rams have been locked in a duel for the rushing lead for several weeks. Elliott, the 2016 rushing champion as a rookie, extended his lead despite the Cowboys' paltry showing at the Colts. He's 98 yards ahead with two games left, and also leads in yards from scrimmage.

It would be putting it mildly to say the Cowboys eased Sean Lee back in after the linebacker missed five games with his second hamstring injury of the season. He played seven snaps against the Colts. The emergence of rookie Leighton Vander Esch and Jaylon Smith is the primary reason, although the defense played poorly enough last week that perhaps more playing time for Lee is warranted.

Evans has 74 receptions and is closing in on Tampa Bay's franchise record for receiving yards in a season. One of just three receivers in league history to begin a career with five consecutive 1,000-yard seasons, Evans has 1,328 yards through 14 games. He needs 95 to break Mark Carrier's club record of 1,422 from 1989.

"Hopefully I can get it," said Evans, who has seven 100-yard games this season. "This week hopefully. If not, then next week."

Dallas right guard Zack Martin, who has now made the Pro Bowl in all five of his seasons, practiced Thursday for the first time since aggravating his left knee injury two weeks ago in a win over Philadelphia that pushed the Cowboys to the brink of the division title. He sat for the first time in his career against the Colts.

If Martin returns, the Cowboys will have to decide between Xavier Su'a-Filo and rookie Connor Williams at left guard. Su'a-Filo went to the hospital in Indianapolis after getting poked in the eye by teammate La'el Collins. The eye is improving, and he was a full practice participant Thursday.