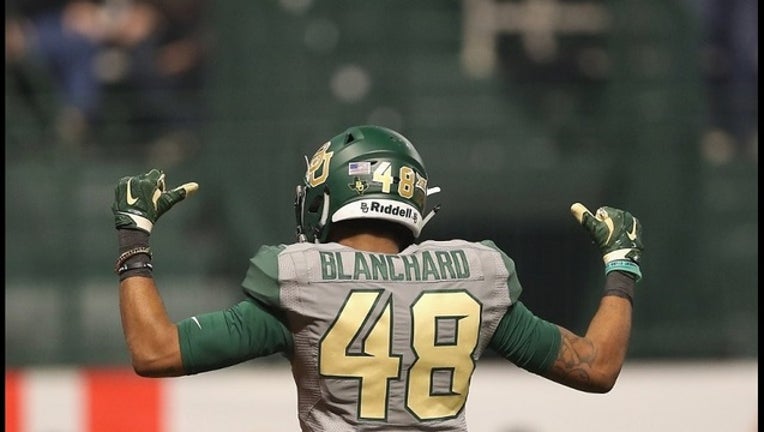 WACO, Texas (AP) - Baylor defensive back Travon Blanchard was free on bond Wednesday after his arrest on a misdemeanor assault charge stemming from domestic violence allegations that led to his suspension from the team five months ago.

Blanchard was arrested Tuesday by Baylor police on a warrant from Fort Bend County. He was booked into the McLennan County jail, where records show he was released on $6,000 bond later that night.

A statement from the Baylor athletic department said Blanchard's status with the team was unchanged. The senior has been suspended from all team activities since February, when a former girlfriend's allegations of violence and threats led to a court granting her request for a protective order against him.

According to online court records, the woman told police that she and Blanchard got into an argument while having dinner at a restaurant in Stafford, Texas, on Feb. 4, and that her pinkie finger was cut in a tussle over her car keys. When the officer asked the woman if there was a history of violence between the two, she answered that there was, in Waco, where they both lived and attended school at Baylor.

Baylor was first notified about the allegations on Feb. 7, and initiated campus student-conduct process against Blanchard, who as a starter last season for the Bears was fourth on the team with 73 tackles.

Several federal Title IX discrimination lawsuits are still pending against Baylor from more than a dozen women who claim the school and football program ignored, mishandled or tried to cover up reports of sexual or physical abuse for years. Another suit was settled out of court last week.

A sexual assault scandal last year led to the firing of former football coach Art Briles and the departures of the school's former athletic director and president.