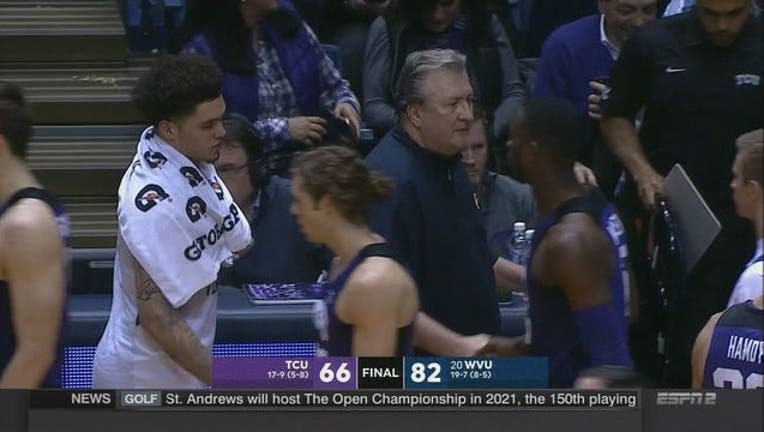 MORGANTOWN, W.Va. (AP) -- Teddy Allen scored 16 points, giving No. 20 West Virginia a needed spark off the bench in an 82-66 victory over TCU on Monday night.

West Virginia has had trouble holding onto leads throughout the Big 12 season but didn't let the Horned Frogs come back from a 38-27 halftime deficit.

TCU twice closed within five in the second half, but went without a field goal over a crucial four-minute stretch and West Virginia capitalized with a rare strong finish. The Mountaineers outscored the Horned Frogs 15-7 over the final three minutes.

With less-than-stellar games from leading scorer Jevon Carter and shot-blocking specialist Sagaba Konate, West Virginia overcame a sluggish start with sparks from reserves Allen, Bolden and Maciej Bender to move ahead for good late in the first half. West Virginia's 38 bench points were its most in a Big 12 game this season.

TCU: The Horned Frogs couldn't mirror their offensive performance in an 82-73 win over West Virginia on Jan. 22. TCU is fighting for its first NCAA Tournament bid in 20 years, but it's been that long since the Horned Frogs have beaten a ranked team on the road.

West Virginia: The Mountaineers posted their third win in four games but time is running out in their quest for a first-ever Big 12 regular-season title. The good news is there are still head-to-head matchups ahead with Kansas and first-place Texas Tech, the two teams they need to beat to get there.

TCU goes for a regular-season sweep of Oklahoma State at home on Saturday.

West Virginia plays at No. 13 Kansas on Saturday. The Mountaineers have never won at Allen Fieldhouse, blowing a 14-point lead with 3 minutes left in regulation and losing in overtime 84-80 last season.