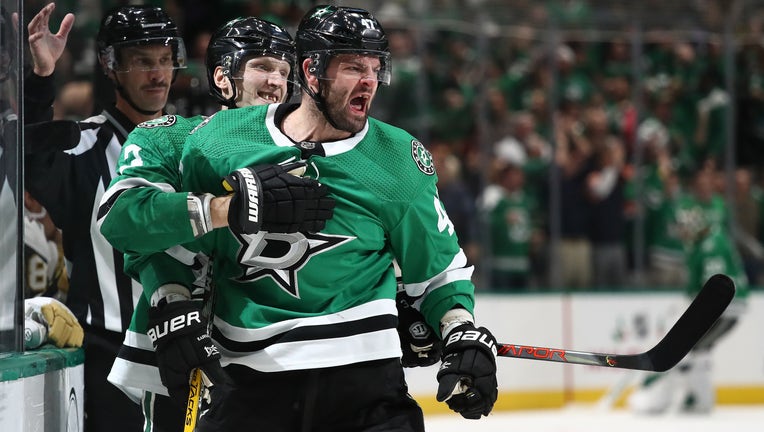 Alexander Radulov #47 of the Dallas Stars celebrates his goal with John Klingberg #3 against the Vegas Golden Knights in the third period at American Airlines Center on November 25, 2019 in Dallas, Texas. (Photo by Ronald Martinez/Getty Images)

Special, as in special teams. Two power-play goals by Radulov and four scoreless penalty kills in the second period led to the Stars tying a team record with their seventh consecutive victory, 4-2 over the Vegas Golden Knights.

"(The penalty kill) stepped up and on the other side, too, the power play had two goals,” said defenseman John Klingberg, who got two of his three assists with the man advantage. “It's a huge part of hockey nowadays. It’s hard to score 5-on-5, and you need special teams to step up.”

The Stars have won seven straight five times in a franchise history that dates back to 1967 as the Minnesota North Stars.

"I think we have a lot more emotion into our game, and I think we're playing a lot faster," coach Jim Montgomery said.

Radulov and Lindell staked Ben Bishop to a 2-0 lead in a dominant first period that Montgomery called “one of the best periods we've played all year.”

Jason Dickinson scored in the second and Bishop finished with 26 saves for his sixth straight victory.

Dallas scored two goals in less than two minutes during the first period.

On the power play at 11:42, Radulov tipped in a shot by Klingberg from the blue line.

“Before the game,” Radulov said, “we were talking about probably whoever won the special-teams game was going to get the most chances. That's what we did."

At 13:25, Andrew Cogliano passed across ice to Lindell, who put a wrist shot between Subban and the left post. Tyler Seguin assisted on both goals.

“We had a tough start to the first period with the two penalties and falling behind 2-0,” Vegas coach Gerard Gallant said. “You can’t get behind against a really good team like that.”

The Stars outshot the Golden Knights 16-6 in the first.

Vegas came out strong in the second period, with 10 of the first 11 shots on goal. Dallas killed four penalties, but Theodore scored on a backhand at 13:48, just five seconds after the last of those expired.

Lindell was on the ice for 5:13 of penalty killing. The Stars have been successful on 15 opponents’ power plays in a row.

“Esa’s probably our best penalty killer because he logs so many minutes and wins so many battles,” Montgomery said.

Stastny was upset with the Golden Knights’ performance on the power play.

NOTES: Klingberg has four assists in two games back from injured reserve. … Dallas captain Jamie Benn left six minutes into the game after getting hit in the nose by a puck. He returned later in the first period. … Stastny has 50 points (21 goals, 29 assists) in 49 career games against Dallas. … Stars C Justin Dowling sat out after leaving the ice in the second period Saturday night because of nausea. … The Golden Knights won all three games vs. Dallas last season and in their first two seasons were 5-1 against the Stars, including 3-0 in Dallas.

Stars: Make a quick trip to Chicago to play the Blackhawks on Tuesday. Chicago’s most recent game was a 2-1 overtime loss Saturday in Dallas.