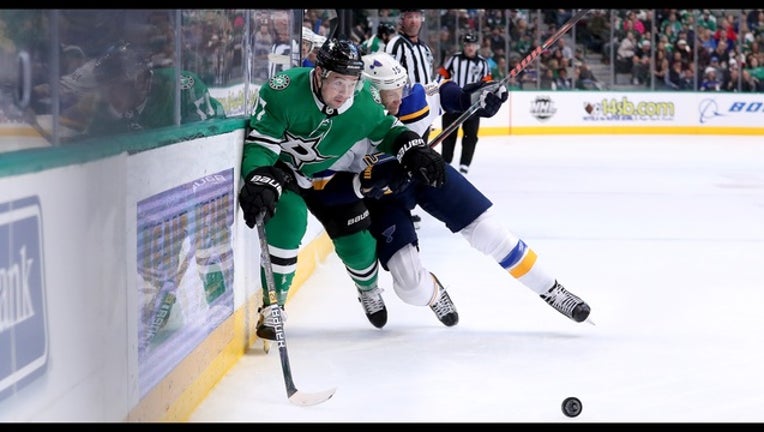 DALLAS, TEXAS - JANUARY 12: Devin Shore of the Dallas Stars battles for the puck against Robby Fabbri of the St. Louis Blues in the first period at American Airlines Center on January 12, 2019 in Dallas, Texas. (Photo by Tom Pennington/Getty Images)

FRISCO, Texas (AP) - The Dallas Stars acquired Andrew Cogliano from the Anaheim Ducks on Monday for Devin Shore in a swap of low-scoring veteran forwards on two frustrated teams.

The 31-year-old Cogliano has just three goals and eight assists in 46 games this season after scoring just his second goal in three months Sunday night in the Ducks' overtime loss at Winnipeg. The loss was Anaheim's 11th consecutive defeat, extending the longest skid in franchise history.

Ducks general manager Bob Murray thanked Cogliano for 7 1/2 years of steady play, but acknowledged his offensive limitations were a problem. Anaheim is 30th among the NHL's 31 teams with just 109 goals this season.

Murray issued a statement Sunday night saying he isn't currently planning to fire coach Randy Carlyle. But Murray also criticized his players for their insufficient efforts during the Ducks' monthlong losing skid - and the next morning he traded away one of his most experienced leaders.

Cogliano is a tremendously durable 12-year veteran who ranks among the NHL leaders with 19 short-handed goals since entering the NHL in 2007-08. But his offensive contributions have all but vanished this season - his goal in Winnipeg was just his second in three months - despite his strong all-around game.

"We've got to get better," Murray said. "Some of our mid-20s guys that I thought would be taking leadership and standing up, it's time to ... when you're losing, it's time for people to stand up and be counted. I'm kind of waiting, and the waiting is kind of, enough is enough. I'm a bit surprised. I thought some people would be farther along in this sort of vein where they have the experience, and they've been around long enough, and they know how to do it when the going gets tough, and it is very tough right now."

Murray didn't name names, but Anaheim's mid-20s underachievers this season could include Rickard Rakell, a former All-Star with just six goals in 33 games this season; Hampus Lindholm, the sturdy defenseman with a minus-4 rating and 17 points; and defenseman Cam Fowler, who has 10 points in 23 games while recovering from broken bones in his face.

Cogliano has missed just two of 914 games in his career. His streak of 830 consecutive games played to start his NHL career ended in January 2018 when he was given a much-criticized two-game suspension for a debatable hit on Los Angeles' Adrian Kempe, ending the fourth-longest consecutive games streak in NHL history.

Cogliano has 379 career points, with 160 goals and 219 assists. He has excelled as a penalty-killer and forechecker throughout his career, and he was a key part of five consecutive Pacific Division champion teams in Anaheim.

"We just thought it was an opportunity for us to get better in a position we want to get better at," Stars general manager Jim Nill said. "We want to play a faster-paced game. And I think Andrew Cogliano's one of the best at that in the league."

The 24-year-old Shore has five goals and 12 assists in 42 games this season. He has 82 points in 209 games over parts of four seasons with the Stars.

Dallas drafted Shore in 2012, and he grew into an NHL regular while playing multiple roles with the Stars, from shutdown defender to top-line forward. He has just one assist in his last 15 games, and he was on an eight-game scoreless streak before the trade.

"This became available, and this is who we were trying to get," Murray said.

The Stars have been through their own internal drama in recent weeks, with CEO Jim Lites publicly criticizing high-scoring forwards Tyler Seguin and Jamie Benn late last month.