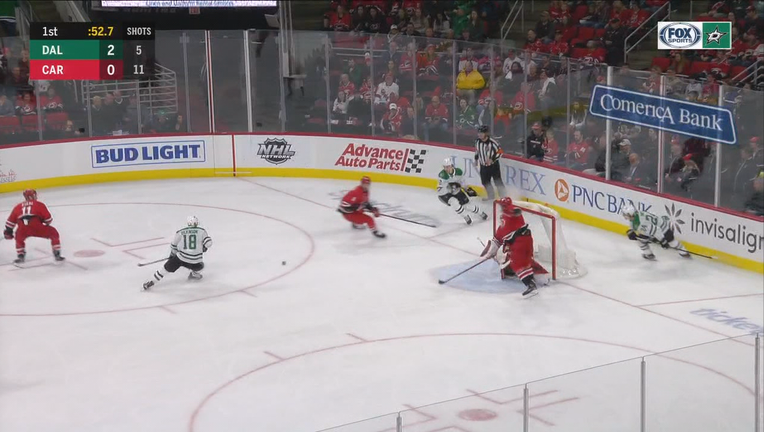 RALEIGH, N.C. - Roope Hintz had a goal and two assists and the surging Dallas Stars rode a three-goal first period to a 4-1 win over the Carolina Hurricanes on Tuesday night.

Hintz posted a season-high three points and helped Dallas improve to 7-1-1 in its last nine games. The Stars are 6-0-2 in their last eight road games. The Stars also are 20-9-3 since Rick Bowness took over as interim coach after Jim Montgomery was fired on Dec. 10.

Denis Gurianov added a goal and an assist and Tyler Seguin and Jason Dickinson also scored for the Stars. Anton Khudobin stopped 40 shots for Dallas, which won despite being outshot 41-16.

“When we win, it’s pretty much what you saw tonight,” Bowness said. “Regardless of what the shot clock said, we had a lot of really good chances from playing good defense in our zone.”

Sebastian Aho scored his 36th goal of the season for the Hurricanes, who are 3-3-1 in their last seven games, including a pair of losses to the Stars. Alex Nedeljkovic, who was making just his second career NHL start after being recalled from Charlotte of the American Hockey League, made 12 saves for Carolina.

“We just had a few too many Grade-A mistakes,” Hurricanes coach Rod Brind’Amour said. “In all, I was not disappointed with that game. I liked the way we came and stuck with our game plan. We just couldn’t find a way to get one in.”

Carolina fans were buzzing at the opening faceoff after David Ayres, the emergency goalie who earned a win for the Hurricanes on Saturday in Toronto, cranked the siren to signal the team’s entrance to the ice.

The Hurricanes also were eager to see Carolina newcomers Brady Skjei and Vincent Trocheck, who were added to the team right before Monday’s trade deadline. Skjei, acquired from the New York Rangers, and Trocheck, who came over from the Florida Panthers, had a rough first period with their new team.

In the opening minute, Skjei failed to handle a pass along the boards in his own end and allowed the puck to squirt free to Jamie Benn along the boards. Benn fired a pass to Seguin at the front of the net, where Nedeljkovic stopped the first shot but couldn’t prevent Seguin from converting the rebound just 51 seconds into the game.

“We’re coming out of the gate strong, so that’s encouraging,” Bowness said. “And when we’re in our zone, we’re bending a little bit but we’re not breaking. We’re surviving it. We’re getting the big saves when we need them.”

With 2:40 left in the first period, Trocheck was serving a tripping penalty when Hintz split the defense and lifted a diving backhander past Nedeljkovic. Just 1:09 later, Dickinson scored after a Hintz shot on a 3-on-1 break caromed off the glass and in front of the net.

Nedeljkovic, who was pressed into action after injuries to Carolina goalies Petr Mrazek and James Reimer, allowed three goals on just seven shots in the first period, but all the goals came on high-quality scoring opportunities.

“It was a good first period, and I think we kept it (going),” Hintz said. “We didn’t give them too many chances and the goalie was great today, so that was a big thing.”

The Hurricanes made big moves at the trade deadline in attempt to give themselves a boost in an extremely competitive Eastern Conference playoff race. They acquired Skjei, Trocheck and defensive Sami Vatanen (who didn’t play Tuesday because of an injury) in an attempt to fill holes in their roster.

Brind’Amour said he was impressed with Skjei and Trocheck.

“I thought they both were good,” he said. “I thought Vinny was really good up front, and Brady, too. He had a couple really good opportunities to score, jumped in the play. I think it’s tough -- those first games are always tough, especially when you really don’t know our system that well. But I thought they looked really good.”

Dallas was better, though. And for a night, at least, the Hurricanes were unable to overcome their mistakes against a Stars team that used its speed and ability to take advantage of scoring chances.

NOTES: Aho has recorded at least one point in 13 consecutive games, a record for the Hurricanes since the franchise moved to Carolina from Hartford in 1997. ... Andrei Svechnikov, who assisted on Aho’s goal, has an 11-game point streak. ... Seguin has eight points over his last eight games. He followed up a game-winning goal Sunday against Chicago with the opening goal against the Hurricanes.

Stars: Visit Boston on Thursday in the second game of a three-game trip.

Hurricanes: Host Colorado on Friday before starting a string of six road games Saturday at Montreal.