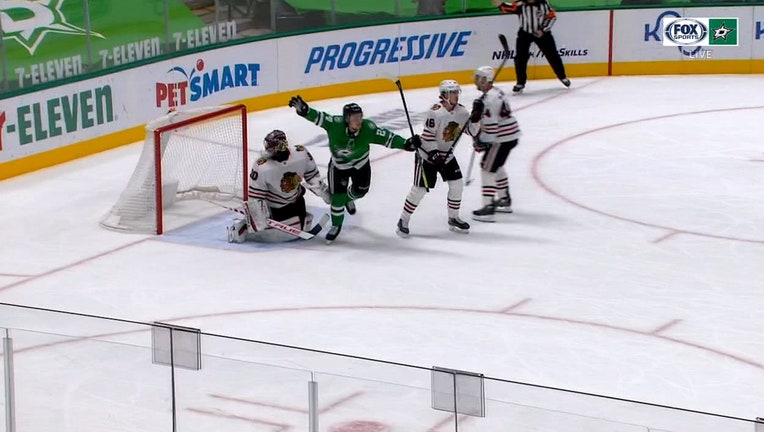 DALLAS - Joel Kiviranta scored 100 seconds in and added an assist, rookie Jason Robertson had four assists for his first four-point game and the Dallas Stars dominated the Chicago Blackhawks 6-1 on Tuesday night.

Joe Pavelski got his team-best 13th goal for the Stars. Roope Hintz had a goal and an assist, and defensemen Jamie Oleksiak, John Klingberg and Esa Lindell also scored. Anton Khudobin stopped 21 shots for Dallas, which has won two of three by a combined 11-1 after dropping four straight games.

Mattias Janmark scored for the Blackhawks, who have allowed six goals each in losing their last two games. Malcolm Subban made 31 saves.

Kiviranta’s third goal came at 1:40 of the first period on a one-timer on the rush after taking a pass from Hintz.

Oleksiak also scored his third of the season, gathering a rebound in the low slot off a wrist shot by Jamie Benn at 15:10 of the first. Benn’s assist was his 700th career point.

Janmark whistled a one-timer from the right circle high on the short side for his ninth goal to pull Chicago to 2-1 at 1:43 of the second. But the Stars took control midway through the period with a power-play goal from Klingberg at 7:25 for his fourth, Pavelski’s breakway at 9:55 on an outlet pass from Robertson and Lindell’s wrist shot from near the blue line at 11:25 for his third this season.

Hintz slapped at a puck in midair near the crease to score his sixth at 6:46 of the third period.

The teams again Thursday night, the last of their four games this season scheduled in Dallas before playing four in Chicago.