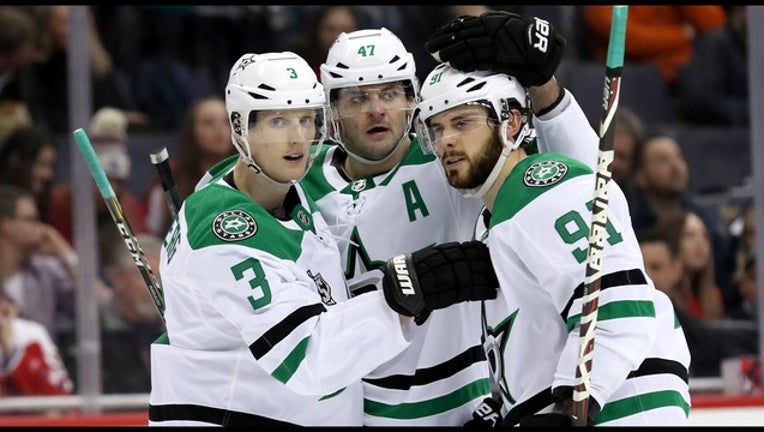 Tyler Seguin of the Dallas Stars celebrates scoring a first period goal with teammates John Klingberg and Alexander Radulov against the Washington Capitals at Capital One Arena on March 20, 2018 in Washington, DC. (Photo by Rob Carr/Getty Images)

DALLAS (AP) - This is the third season in a row the Dallas Stars have a different coach and a different style. They're ready to have some fun with the guy fresh out of college.

After the differing approaches of grizzled veterans Lindy Ruff and then Ken Hitchcock in a one-season return of their Stanley Cup-winning coach from two decades ago, there is more of an emphasis on relentless offense with new coach Jim Montgomery in his transition from the college ranks to first-time NHL head coach.

"It's going to be a lot of fun," captain Jamie Benn said. "We're going to work hard and it'll be a high-flying Stars team with a lot of pressure on the ice."

The 49-year-old Montgomery said he's sure the team has the speed and depth to play his style.

Montgomery spent the past five years at the University of Denver, where he had a 125-57-26 record and won a national title two seasons ago. He won two championships as a head coach and general manager in the United States Hockey League before that. He was part of a college national championship as a player at Maine in 1993, and did play 122 NHL games - his last was with Dallas in December 2002.

"We've had some great coaches in here," Tyler Seguin said. "But at the end of the day, we haven't had this kind of coach, a younger guy, a player's coach if you want to call it that, someone that's won pretty much everywhere he's gone and is going to change things up. I think everyone's excited for that and looking forward to a fresh new year."

SEGUIN AND THE TOP LINE

Seguin, the 26-year-old five-time All-Star with a career-high 40 goals last season, could have become an unrestricted free agent after this season. But he signed a nearly $80 million, eight-year contract extension through 2026-27 just before training camp. Seguin is on the front line with 29-year-old two-time All-Star Benn and Alexander Radulov, who had 27 goals and 45 assists last season. Only Benn had more total points than Seguin's 78, with Benn at 79 (36 goals, 43 assists) after eight goals and two assists in the last five games.

John Klingberg led NHL defensemen with 59 assists last season, when Marc Methot was limited to 36 games in his Stars debut because of knee issues. A healthy Methot should be a boost to the Stars defense.

"If you look at the lineup, we know we have star power. We have everything on paper. It looks good," Klingberg said. "We're just going to have to find those pieces blending into each other."

Dallas missed the playoffs for the eighth time in the past 10 seasons after an eight-game losing streak last March. They finished 42-32-8 for 92 points, which was a 13-point increase from 2016-17 but three points out of the Western Conference's eighth playoff spot.

Right wing Valeri Nichushkin played 166 games in three seasons for the Stars by time he was 21 before returning home to Russia and playing the past two seasons in the Kontinental Hockey League. The 10th overall pick by the Stars in the 2013 draft is back after signing a $5.9 million, two-year contract with Dallas at the start of free agency over the summer.

The Stars open the season Oct. 4 against Arizona, the first of four consecutive home games in 10 days before their first road game.

"I don't think I could have picked a better schedule to start the season in my first year because everything's new," Montgomery said. "Being at home, having those three days of practice in between home games, is going to be instrumental in us getting off to a good start."

The Stars have now been in Dallas for 25 years.