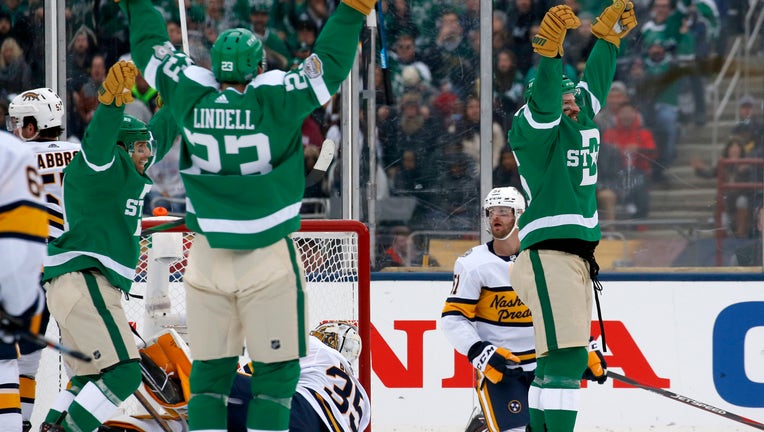 Blake Comeau #15 of the Dallas Stars reacts after scoring a goal during the third period of the 2020 NHL Winter Classic at the Cotton Bowl in Dallas. (Photo by Eliot J. Schechter/NHLI via Getty Images)

DALLAS - Alexander Radulov scored the tiebreaking goal on a one-timer with just under 15 minutes left, Andrej Sekera quickly added another goal and the Dallas Stars beat the Nashville Predators 4-2 in the NHL Winter Classic on Wednesday.

The Stars scored four goals in less than eight minutes, overcome a two-goal deficit they had after a game misconduct penalty early in the first period when Stars forward Corey Perry was ejected after he elbowed defenseman Ryan Ellis in the head.

The power-play goal by Radulov from the right circle was the second of three goals for the Stars in the third period before a crowd of 85,630 at Cotton Bowl Stadium in Dallas, the second-largest crowd to attend an NHL game.

Mattias Janmark had a goal and an assist in the third period for the Stars. John Klingberg assisted on both power-play goals to start the third before Sekera's first goal in nearly three years.

Dallas got its first goal with 1:08 left in the second period, when Jason Dickinson skated around the back of the net and passed across the front of goalie Pekka Rinne to Blake Comeau for the shot that made it 2-1. 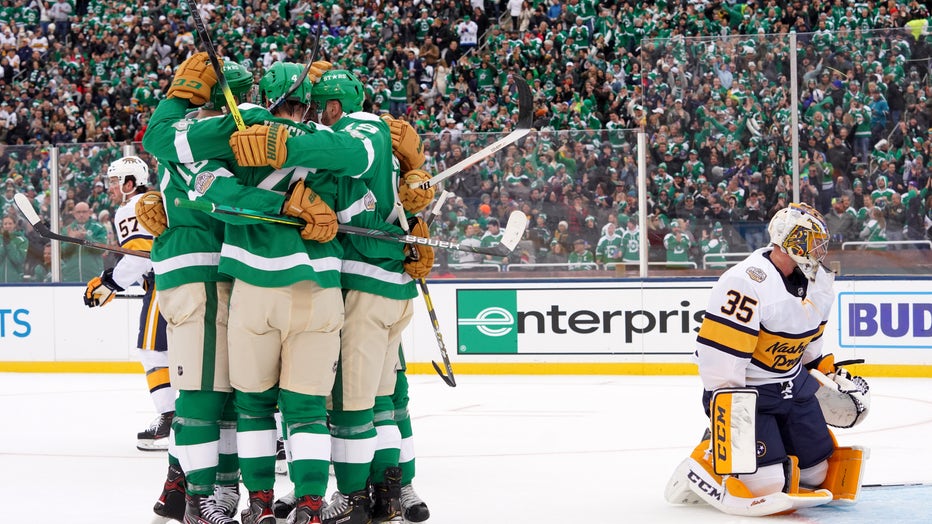 Rinne and Stars goalie Ben Bishop both had 31 saves.

Dallas reached the midpoint of its 82-game regular season with its third win in a row. The Stars also overcame a 2-0 deficit in their previous game, with four goals in the third period of a 4-2 win at Arizona on Sunday.

Nashville has lost three in a row.

The Predators led 2-0 after Matt Duchene scored a goal and assisted on another by Dante Fabbro during the extended power play from Perry's penalty less than three minutes into the game.

Ellis was down on the ice for a short time, before being helped off the ice. He was then taken to the locker room on a motorized cart and never returned.

The hit by Perry came right after Ellis had gotten the puck in front of the blue line. Officials issued the game misconduct penalty after reviewing replay.

After another Dallas penalty created a 5-on-3, Duchene's ninth goal put the Predators up 1-0. Time was running out on the five-minute major against Perry when Duchene assisted on Fabbro's fourth goal.

NOTES: The largest crowd for an NHL game was 105,491 fans at Michigan Stadium for the 2014 Winter Classic when Toronto beat Detroit. ... NHL officials said the crowd included more than 20,000 Predators fans, which Commissioner Gary Bettman noted was more people than would fit into Nashville's home arena. ... The temperate at the start of the game was 54.9 degrees, the warmest for a Winter Classic. That was about average for North Texas on Jan. 1. But it was also overcast, which made for good playing conditions for the Southernmost outdoor game in NHL history.

Predators: Travel to Los Angeles and play the Kings on Friday night.

Stars: Back in their real home arena, only a few miles from the Cotton Bowl, for a game Friday night against Detroit.