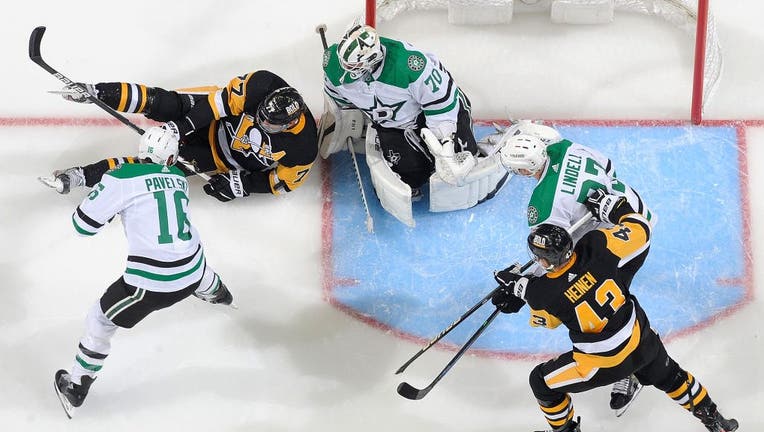 PITTSBURGH, PA - OCTOBER 19: Jeff Carter #77 of the Pittsburgh Penguins battles for the puck in front of Braden Holtby #70 of the Dallas Stars at PPG PAINTS Arena on October 19, 2021 in Pittsburgh, Pennsylvania. (Photo by Joe Sargent/NHLI via Getty I

PITTSBURGH - The Dallas Stars are built to win tight games, and they're certainly wasting little time getting comfortable with them.

Joe Pavelski and Alexander Radulov scored in a shootout and Braden Holtby finished with 27 saves as the Stars edged Pittsburgh 2-1 on Tuesday night to finish a season-opening four-game trip 2-2.

Both wins came after regulation, and the two losses have been by a combined three goals.

Michael Raffl scored his second goal of the season for the Stars.

Pavelski and Radulov beat Penguins goaltender Tristan Jarry with backhand shots in the shootout as Dallas ended a five-game losing streak in Pittsburgh.

Holtby, who stopped Jake Guentzel and Kris Letang in the shootout, believes difficult road trips to start the season can be a good thing.

"(They) really test yourself and test your poise," Holtby said. "I thought we really did that. We stuck to our gameplan. Obviously, there’s things we want to do better, but a ton of positives to this point."

John Marino scored his first goal of the season for Pittsburgh, while Jarry played spectacularly at times and finished with 28 saves.

The Penguins have picked up at least one point in each of their first four games despite playing without injured stars Sidney Crosby and Evgeni Malkin.

"We’re playing a simplified version of our identity," Pittsburgh coach Mike Sullivan said. "We’ve liked the way our team has progressed here. ... I think the collective effort has been noticeable."

The crowd of 16,450 — nearly 2,000 short of capacity — marked the first non-sellout crowd for the Penguins since Feb. 14, 2007, a span of 634 games. The streak ended on a night when Pittsburgh honored Hall of Fame broadcaster Mike Lange.

The man known for his idiosyncratic goal calls like "scratch my back with a hacksaw" and "buy Sam a drink and get his dog one, too" was honored with a lengthy standing ovation in the first period. Even several members of the Stars tapped their stick on the ice in appreciation of Lange, who stepped away from the microphone in August after 46 years with the organization.

The broadcast booth isn't the only area where the Penguins may be in the midst of a transition. The opening week of the season has provided the team a glimpse of what life might be like without Crosby or Malkin.

Crosby is nearing a return from wrist surgery, while Malkin began skating this week after undergoing knee surgery, though he's likely out at least another two months.

Pittsburgh isn't quite dynamic without these two franchise cornerstones, but has thrived in early games by playing responsibly, particularly in the defensive end. It's a style Sullivan believes needs to become the norm for a group that, when fully healthy, is one of the NHL's most dynamic attacks.

Pittsburgh spent most of the first period clamping down on the Stars before a late lapse gave Dallas room to take an early lead. Raffl finished off an extended push by slamming home a one-timer off a cross-ice pass from Radek Faska with 10 seconds to go in the first period.

Marino pulled the Penguins even 5:26 into the second. The defenseman held the puck in at the blue line, then drifted toward the Dallas net and found himself in the right spot when a rebound off a Brock McGinn shot went right to his stick. Marino ripped it by Holtby to give himself at least one point in each game so far this season.

Jarry, trying to bounce back after a dreadful performance in last year's playoffs, continued his strong start by making a series of sprawling saves to keep the game tied. He slid across the crease to turn away Denis Gurianov in the second and stopped Jacob Peterson from point-blank range in the third. The crowd began chanting Jarry's name in the middle of the third period.

Stars: Host the Los Angeles Kings on Friday night in their home opener.

Penguins: Continue an eight-game homestand on Saturday night against Toronto.