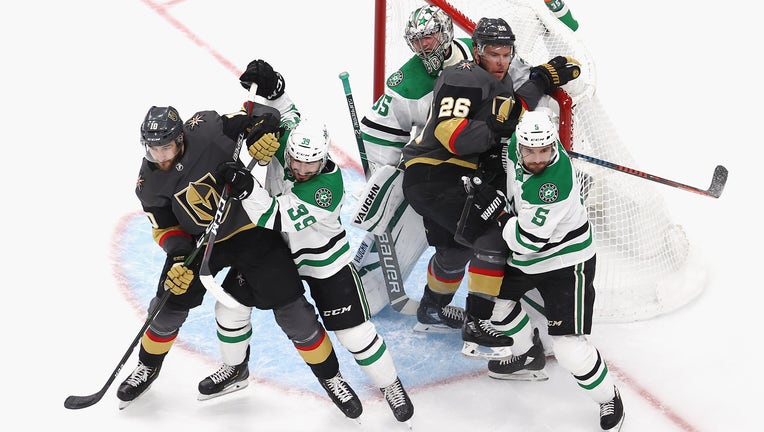 The Dallas Stars defend against the Vegas Golden Knights in Game Two of the Western Conference Final during the 2020 NHL Stanley Cup Playoffs at Rogers Place on September 08, 2020 in Edmonton, Alberta, Canada. (Photo by Bruce Bennett/Getty Images)

EDMONTON, Alberta - Tyler Seguin tried to answer what happened in the Western Conference final to the Dallas offense that lit it up last round.

Dallas hasn't looked like the same team that put up 31 goals in seven games against Colorado. After winning the Western final opener 1-0 and getting shut out by the Golden Knights in Game 2, the Stars need to find their offense in a showdown between two similar, big teams that could come down to little adjustments determining who goes on to play for the Stanley Cup.

"This whole series will be a chess match," Dallas captain Jamie Benn said Wednesday ahead of Game 3 Thursday night. “It just goes to show how well-structured and how good of a team Vegas is. They don’t give you much, and you’ve got to take advantage of your opportunities."

The Stars haven't done that. Since scoring on their first shot of Game 1, they've had 19 attempts blocked by a Vegas defender, 48 stopped by a goalie and missed the net 14 times. The Golden Knights have 57 shots on goal so far and chased Anton Khudobin with three second-period goals Tuesday.

Benn thinks the power play has to make a difference, and Dallas is 0 for 4 in that department, as well. It's high time for some of the Stars' best to produce, as Seguin and veteran winger Corey Perry have each gone without a point for six consecutive games.

“It could be frustrating, but at the same time, we’ve won a few hockey games,” Perry said. “We’re battling out there. We’re trying to do other things to help the team, and those will come. We’re getting our looks, and goals will come.”

That was the Golden Knights' approach after they ran into a hot goalie late in their second-round series against Vancouver and put up their own goose egg in Game 1 of the West final. Vegas looked like its old self when the puck started to go in.

Even when it hasn't, the penalty kill has been excellent — a perfect 15 of 15 over the past five games. And the Golden Knights are siphoning confidence from the Stars and building on it, knowing they can handle taking the odd penalty or two.

“A lot of it is confidence hopping over the boards and having the confidence in the PK’s case to take that extra foot of ice or challenge that play a little bit quicker than you normally would if you don't have that confidence,” coach Peter DeBoer said. “I just think we’ve got a little bit of swagger there right now, and we want to keep that.”

Dallas doesn't lack belief in its overall team game, which is predicated on being aggressive in the offensive zone and defending well. It's basically the same strategy as Vegas, which makes this much more of a mirror match than any series so far in the playoffs.

“It’s a real balance and I think a lot of it has to do with who you’re playing against,” said Dallas' Jim Nill, who was named a finalist for the general manager of the year award. “Vegas is a very good team. ... We’re both big, heavy teams, we both support the puck well and we both got great goaltending. So, I think what you’ve seen is what you’re going to get.”

Unfortunately for the Stars, the Golden Knights have been in control since the third period of Game 1 and in Robin Lehner and Marc-Andre Fleury have two goaltenders that are on a roll. To turn things around and avoid the “self-inflicted problems” coach Rick Bowness said cost them in Game 2, it's up to him and his staff to counter what Vegas is doing better: beating the Stars at their own brand of hockey.