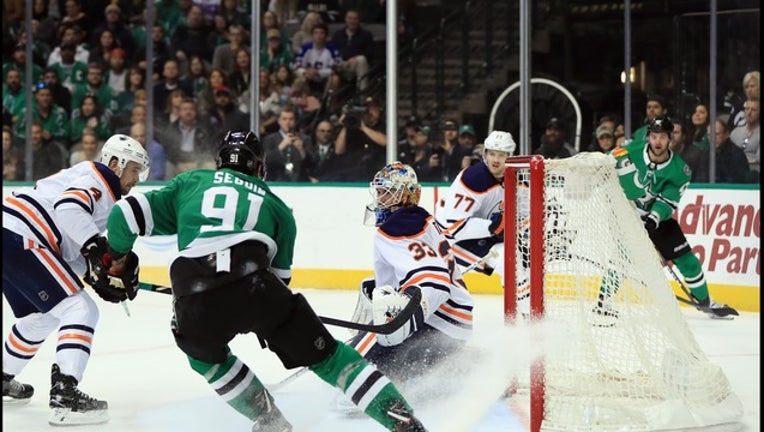 Cam Talbot #33 of the Edmonton Oilers gives up a goal against Jamie Benn #14 of the Dallas Stars in the first period at American Airlines Center on January 6, 2018 in Dallas, Texas. (Photo by Ronald Martinez/Getty Images)

The Stars have won six of their past eight games. Edmonton has lost three of its past four and has been outscored 16-2.

Radulov assisted on the other first-period goals, giving him two goals and four assists in Dallas' past two games. He had three goals and five assists in the Stars' three games against Edmonton this season.

Leon Draisaitl's power-play goal for the Oilers at 2:04 of the third period denied Ben Bishop his fifth shutout of the season.

Oilers goalie Cam Talbot was pulled at 4:45 of the second period after allowing four goals on 19 shots. He was replaced by Al Montoya, who was acquired on Thursday from Montreal and had not played since Nov. 4 because of concussion symptoms.

Stars coach Ken Hitchcock opened the game with Benn and Seguin playing with Brett Ritchie, switching to Radulov early in the first period.

Dallas' three first-period goals were all backdoor one-timers. Radulov opened the scoring at 10:21, beating Talbot to the glove side. He was fed by Seguin, who received a cross-ice breakout pass from Klingberg.

Radulov passed to Benn less than three minutes later for an easy backhand.

Seguin tapped in a cross-crease pass from Radulov at 16:32, Klingberg getting the other assist.

Janmark scored when attempting to pass from the goal line to Brett Ritchie in the crease. The puck caromed off the skate of Oilers defenseman Andrej Sekera past Talbot.

NOTES: Seguin leads Dallas with 21 goals this season. ... With Montoya activated, the Oilers waived goaltender Laurent Brossoit. Brossoit was 3-7-1 with a 3.22 goals-against average as Talbot's backup this season. ... Oilers forward Patrick Maroon served the second and last game of a suspension for a hit on Los Angeles' Drew Doughty on Tuesday. ... Dallas defenseman Marc Methot was a late scratch with a sore knee, replaced by Julius Honka. Methot had returned to the lineup Thursday after missing 26 games with a knee injury.

Oilers: It will be back-to-back matinees at Chicago on Sunday, the second game of a season-long five-game road trip.

Stars: Their bye week will begin Sunday. They'll play the last of six straight home games, their longest such stretch of the season, next Saturday vs. Colorado.