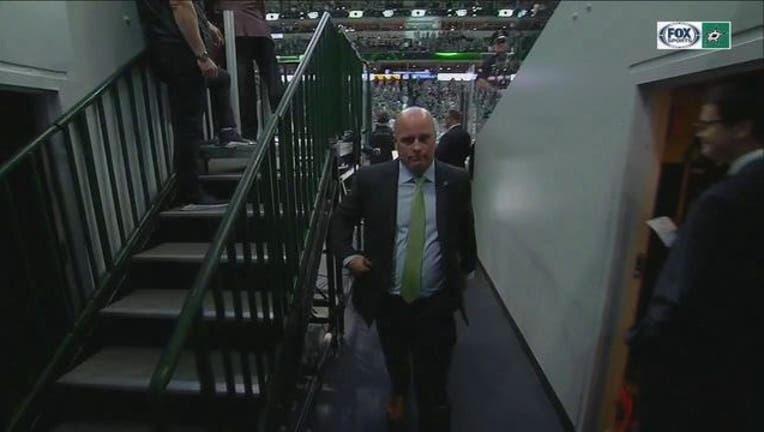 The Dallas Stars coach isn't even sure it counts.

"First of all, players win games," Montgomery said after Devin Shore, Alexander Radulov and John Klingberg scored less than two minutes apart in the second period of a 3-0 win over the Arizona Coyotes on Thursday night.

"I don't know why coaches have records. I really think players win championships, and I've always believed that. I think coaches help give them opportunities to do that."

Ben Bishop stopped all 30 shots for his first season-opening shutout and the 25th of his career. Bishop has a four-game winning streak on opening night.

Shore broke a scoreless tie by putting in a rebound as he was going to his knees. Radulov beat backtracking former Dallas defenseman Alex Goligoski one-on-one in a battle for the puck as they skated up the ice and slipped it between Antii Raanta's pads 27 seconds later.

A little more than a minute after that, Klingberg skated alone up the right side in 4-on-4 and beat Raanta inside the far post.

"A couple of big 'yeahs' by me behind the bench on every one of them," Montgomery said. "So, it was a great flurry by us."

Defenseman Connor Carrick, acquired in a trade with Toronto three days before the opener, assisted on the first two goals.

Jamie Benn also had two assists in the Stars' eighth straight win over the Coyotes - all in regulation by a combined score of 30-13. It was Dallas' 11th consecutive home win over Arizona, a streak dating to February 2012.

The Coyotes - who opened last season with 10 straight losses, nine in regulation - hit the post twice when the game was scoreless.

Clayton Keller did it in the first period, and Oliver Ekman-Larsson in the second less than a minute before Shore's goal sparked the Dallas flurry.

"We hit the post, and then ...," second-year coach Rick Tocchet said. "It's the first game of the year, but it's something you can't let happen. We have to play quicker and initiate."

Montgomery, who played his final game with Dallas in 2002, was making his debut less than two years after winning an NCAA championship at Denver. He is one of three current NHL coaches who made the jump from college.

General manager Jim Nill chose Montgomery as the club's third coach in three seasons after one year under Ken Hitchcock, who led the Stars to their only Stanley Cup title in 1999 but missed the playoffs in his return 15 years after he was fired.

"It's nice to not have to make him wait for it," Bishop said of Montgomery's first win. "There's a lot of firsts in here tonight. Monty's obviously one of them. Hopefully we can get him a lot more."

Missing several injured forwards they figure to count on for scoring, the Coyotes outshot the Stars 30-25 but didn't generate many good chances in the final period. Raanta stopped 22 shots.

Bishop finished a season-opening shutout after getting injured when he was working on one in his Dallas debut last season. He had stopped all 19 shots for a 1-0 lead over Vegas when Bishop took a puck to the mask early in the third period and left the game. The Golden Knights rallied for a 2-1 win.

"Can't start thinking I'm feeling good because that's like the worst thing you could probably think to yourself," Bishop said. "Did a good job of clearing the front when there was a couple of ones that squeaked by."

NOTES: Stars D Stephen Jones started the season on injured reserve. He was dealing with headaches during the preseason. He says they might be related to concussions sustained last season. ... Coyotes D Jordan Oesterle went to the locker room in the second period after a hard check from Tyler Pitlick but returned to the game. ... Stars F Tyler Seguin was scoreless in his first game since signing a $78.8 million, eight-year contract extension.