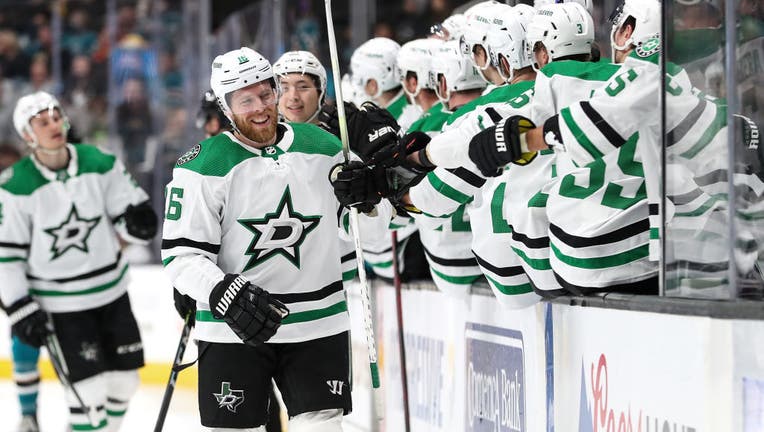 "I think we’re playing well right now," Hintz said. "Good teams find a way when you have to. I think we just have to keep building and keep playing better each game."

San Jose got goals from Nick Bonino, Brent Burns, John Leonard and Logan Couture, but the Sharks lost their third in a row.

San Jose took an early lead on Bonino’s ninth goal of the season 1:25 into the game, but the Stars answered with four straight to close the first period, including Robertson’s 32nd with 0.3 seconds remaining.

"That certainly helped," Dallas coach Rick Bowness said. "To give up that early goal got our attention and I love how we responded. We came right back quickly and got a couple ourselves."

Burns got one back for the Sharks in the second, scoring his ninth of the season.

Pavelski scored his 25th in the third period, his first career goal against his former team, to make it 5-2.

"I think we answered well when they scored. That’s big for the team when we get some goals early," Hintz said.

Leonard got his first of the season with 4:39 left. Couture added his 22nd with 1:25 remaining, but the Stars held on.

"We lost the first period, we won the second, came out and we won the third," Sharks coach Bob Boughner said. "But you can’t start allowing four goals."

San Jose goalie Kaapo Kahkonen allowed four goals on 14 shots before being replaced by James Reimer to start the second period. Reimer stopped 14 of the 15 shots he faced.

Scott Wedgewood made 24 saves in his second start since joining the Stars from Arizona.

"It’s a big trip for us right now," Hakanpaa noted. "If we can go home with four wins, it would be huge."

Dallas snapped a three-game losing streak against San Jose, beating the Sharks for the first time since Dec. 7, 2018.

Sharks D Mario Ferraro and C Jonathan Dahlen both returned from injuries. Ferraro had an assist after missing five weeks with a broken leg. Dahlen missed five games after taking a puck to the face.

"I’m just happy to be back," Ferraro said. "It’s tough seeing the boys battle and it’s tough sitting out. It went pretty quickly though, for me."

Added Boughner: "It’s tough to keep a guy like that out when he’s begging to get back in the lineup and the doctors have given him the green light. ... He brings a lot of intensity and energy to our team."

After a quick start to his rookie season, Dahlen has been slowed by injuries but hopes to finish strong.

"I’ve had more injuries this year than I’ve had all my career," he said. "So it hasn’t been ideal, but I’ve got to stay positive."

NOTES: Stars D Esa Lindell missed his second straight game with an upper-body injury. "There would be a chance he could play tomorrow, but without skating today or the last couple of days, that would be iffy as well," Bowness said. ... Sharks RW Kevin Labanc, out since mid-December following shoulder surgery, might miss the rest of the season for precautionary reasons. "It might come to a point in time where we might shut him down for the season," Boughner confirmed. "But he feels good. Every day he comes, he’s stronger and is in a really good spot, but it’s just a matter of risk/reward at this point."

Sharks: Host Edmonton on Tuesday night, the first of two April meetings against the Oilers.