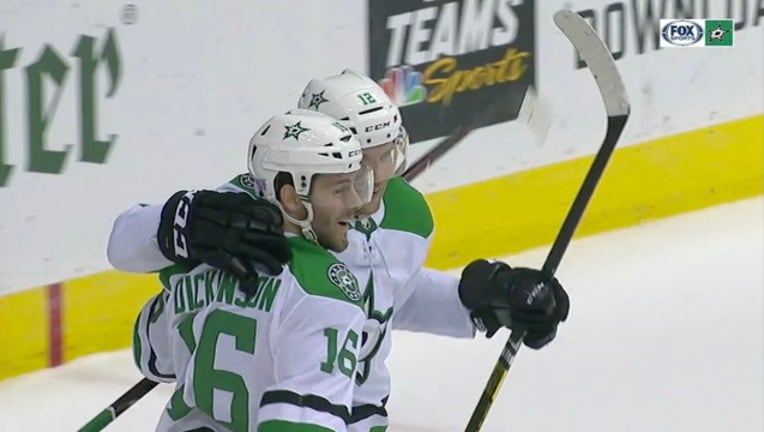 WASHINGTON (AP) - Remembering recent failures when it comes to extending winning streaks and fearing the defending Stanley Cup champions turned out to be a perfect recipe for the Dallas Stars.

"There's a lot of belief right now," Montgomery said. "I don't see any complacency in our group. I just see a determination and a focus that I haven't seen before. That's the exciting part."

The excitement is building for the Stars, who are starting to develop some consistency. Jason Spezza scored on a breakaway and Tyler Pitlick forced a turnover for an unassisted goal 10 seconds later as Dallas jumped out to a 2-0 lead that showed players they could hang with the Capitals.

"When you come in here, there's a little bit of fear of knowing that they can run you out of the rink if you're not ready to go off the hop," Spezza said. "You can't take these guys lightly, and I thought we learned a lesson from some of the other games we played on the road."

In the process, the Stars also learned about rebounding from mistakes and moving forward after blowing a lead. Goaltender Ben Bishop allowed soft goals from sharp angles to Nicklas Backstrom and Evgeny Kuznetsov, Dallas' defensive structure was lacking and yet it was able to get to overtime.

Playing 3-on-3 in OT, Dallas outshot Washington 6-1. Capitals goalie Braden Holtby stopped Tyler Seguin on a penalty shot 59 seconds in, but Dickinson beat him on a deflection for his third of the season.

"We'll take it," said Bishop, who stopped 29 shots. "They're not always going to be Picassos. Sometimes you're going to have to grind. Last game we had to hold on at the end. This one we had to find a way to come back and get that one in overtime. Finding different ways to win, that's the big thing. It doesn't matter how, just as long as you get it."

It also was a struggle for the Capitals, who turned the puck over on all three Stars goals in regulation and still had a chance after Kuznetsov tied it on the power play with 12:03 remaining in the third period. Brett Connolly also scored for Washington, but ill-timed turnovers in the wrong places led to a second consecutive defeat.

"Every team comes fast like that," said Holtby, who gave the puck away to Pitlick for his goal. "It's not a surprise. You just have to be prepared for it and have a plan and execute. A couple plays, we didn't do that."

While the Capitals continue to search for the kind of 60-minute effort that defined their playoff run last spring, the Stars are feeling good in the middle of a long Eastern Conference road trip. Montgomery set the goal of three wins in six games, and his team is already there with two left before returning home.

"Everyone's contributing," Montgomery said. "You're together and it's a good feeling and everyone is enjoying being around each other."

NOTES: Holtby finished with 32 saves plus his stop on Seguin on the penalty shot in overtime. ... Captain Jamie Benn also scored for Dallas, his sixth goal of the season. ... Capitals D Brooks Orpik missed his second consecutive game with a lower-body injury. He did not practice all week. ... Stars D Marc Methot and F Alexander Radulov were out with lower-body injuries. Montgomery said Radulov returned to Dallas for treatment and will miss the final two games of the trip. ... Montgomery said D Connor Carrick (foot) should be able to get back into skates soon.

Stars: At Boston on Monday in the fifth stop on their six-game trip.

Capitals: Continue a five-game homestand against Connor McDavid and the Edmonton Oilers on Monday.