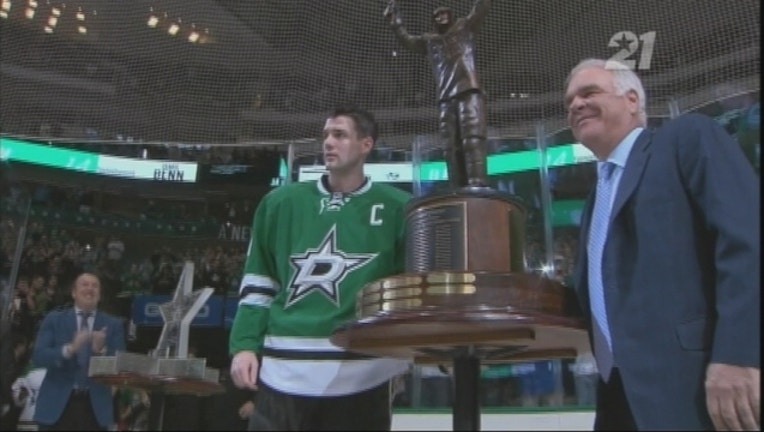 DALLAS (AP) — Dallas will try to convert a second straight promising offseason into a trip to the playoffs, something the disappointing team couldn't do last season because of a slow start and another slump triggered by a key injury.

Now that he's healthy, Tyler Seguin figures to be joined on the top line with Jamie Benn by Patrick Sharp, who won his third Stanley Cup with Chicago a few months ago. The Stars also went with championship experience in trying to strengthen their back end by adding former Blackhawks defenseman Johnny Oduya in free agency.

"A lot of teams look great on paper," said Seguin, who will face Sidney Crosby and the Pittsburgh Penguins in the season opener at home Thursday night. "We're in the toughest division in the league so our start should be huge, our division games are going to be huge. We need to bring a lot more focus starting out this year than it was last year."

Seguin was among the scoring leaders until he injured his right knee and the Stars lost seven of the first eight games without him last February and March. Benn won the Art Ross Trophy as the NHL's top scorer despite playing on two bad hips that required offseason surgery.

Dallas had an inconsistent defense in front of goalie Kari Lehtonen, who was up and down as well. That's why general manager Jim Nill signed Oduya after sending solid two-way player Trevor Daley to the Blackhawks in the Sharp deal. And that's why the Stars added a second goaltender in former San Jose starter Antti Niemi.

Benn and Ales Hemsky, who also had offseason hip surgery, were limited in training camp and preseason games, so their status is somewhat uncertain.

"I want to get off to a good start," coach Lindy Ruff said. "We knew there'd be some pieces missing early here in camp and I really felt there was a couple of games in the preseason that we deserved to win and didn't. There's a lot of stuff I've liked."

Things to consider for a once-elite team that has missed the playoffs six of the past seven seasons, including a franchise record five straight from 2009-13:

TWO-HEADED GOALTENDER: Ruff hasn't named a starting goalie for opening night and isn't sure how the two-man approach will play out. Lehtonen has been the clear No. 1 goalie for five straight seasons in Dallas, but he wasn't good statistically last season after faltering late in a six-game loss to Anaheim in the first round of the playoffs in 2014. "I don't know if there's much more to say than I'm going to use them both," Ruff said.

YOUNG DEFENDERS: The 34-year-old Oduya gives Dallas a veteran leader alongside Alex Goligoski for a group of young players with plenty of talent, a list topped by John Klingberg. The 23-year-old led rookie defensemen in scoring with 40 points (11 goals, 29 assists). The Stars also have high hopes for fellow Swede Patrik Nemeth. "They're all taking steps forward," said Goligoski, who turned 30 in July. "It's natural at their age."

ROUGH PRESEASON: Since they're coming off a disappointing non-playoff season that started with high expectations, the Stars raised concerns among fans with a 1-6 preseason record that included a 4-0 loss to Chicago in the finale with most key players on the ice. "Whether you went 6-1 or 1-6, doesn't make a difference," Seguin said. "We've had situations where we've had an unbelievable preseason and a terrible start or a terrible preseason and a great start. It doesn't matter."

SHOOTING FROM THE HIP: Benn and Hemsky continued a recent trend of hip surgeries for Dallas players. Like Benn, Klingberg had double hip surgery in 2014 before emerging as a potential star defenseman last year. Young Russian Valeri Nichushkin had the procedure early last season and missed all but eight games. Now, Ruff waits to see how soon Benn and Hemsky will be without restrictions. "I think that right now is the great mystery," the coach said.

HOME SOUR HOME: The Stars barely had a winning record at home (17-16-8), and only three teams had fewer victories on home ice. That's the first thing Goligoski mentioned when asked how the outcome could change from a season ago. "All the really good teams in this league, they're awesome at home," he said. "You don't see teams that kind of waver at home that are playoff teams."