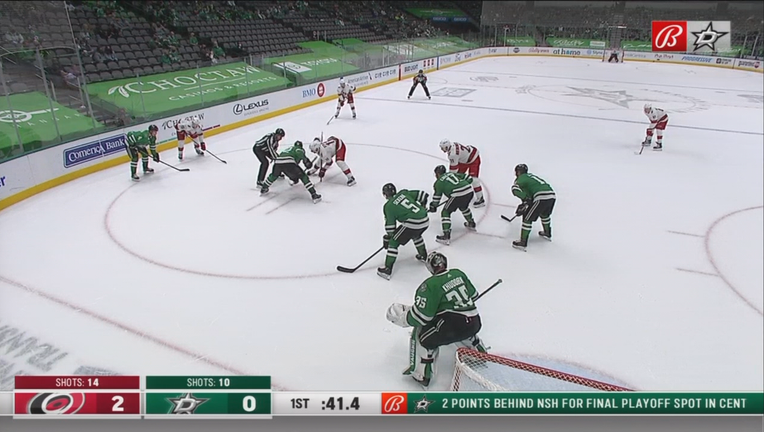 Sebastian Aho had a goal and two assists for the Hurricanes while Andrei Svechnikov, who they got with the second overall pick in the 2018 NHL draft held in the same building, had a career-high three assists.

The Hurricanes, who clinched a playoff spot for the third consecutive season in the overtime loss that started the back-to-back games in Dallas, aren't planning to let up now.

"We’re trying to win every game. When you take that down to the day to day, that’s what you’ve got to focus on," Staal said. "Whatever these games mean at the end of the year, it’s going to be important. We want to show up and play our style, and stay sharp and do the things that we do."

Defending Western Conference champion Dallas had earned points in its previous seven home games (6-0-1), but missed a chance to get even with Nashville for the Central's fourth and final playoff spot. The Stars have two games in hand against the Predators, who they play Saturday.

"We knew what to expect from Carolina. They play the same way every night, they’re big, they’re fast, they forecheck, they come at you. I think it was more us, our inability to handle all of those issues," Stars coach Rick Bowness said. "We were half a step behind physically and half a step behind emotionally. And when you do that against that team, they’re going to make you look as bad as we did tonight."

Jason Robertson had his 15th goal for Dallas to extend his point streak to nine games, breaking a tie with Jamie Langenbrunner (1996-97) for the longest by a rookie in Stars history. It is also the longest by any NHL rookie this season.

Nashville lost 7-4 at home Tuesday night to second-place Florida, which remained two points behind Carolina in the standings. The Hurricanes have 71 points with seven games left.

The Stars played their final home game, and their first of seven consecutive road games to end the regular season is Thursday night at Tampa Bay. Carolina plays its next five games at home, starting Thursday against Detroit.

"We’ve got to forget about today and move on," Robertson said. "We still have this big road trip, and a lot of hockey left."

Carolina started the second period on a power play, which was winding down when Svechnikov made a pass to Aho, whose one-timer from about 50 feet ricocheted hard off the glass and over the net into the crease behind goalie Anton Khudobin. Staal swatted the puck in the net for a 3-0 lead.

Aho had an earlier power-play shot that bounced off Khudobin and right onto the stick of Staal in front for the first goal 7:08 into the game. Only 61 seconds later, Aho scored his team-best 21st goal this season.

Staal had two goals in his previous 10 games since a two-goal game April 6 versus Florida. He has 16 goals and 37 points, including the primary assist on Nino Niederreiter's 18th goal in the third period.

"Jordo, he just does what it does. He’s consistent," Hurricanes coach Rod Brind'Amour said. "I can’t say enough good things about him."

Max McCormick's second goal of the season was his second in as many nights for Carolina. ... Hurricanes wing Teuvo Teravainen played for the first time since March 4 after missing 25 games because of a concussion. It was only his second game since Feb. 19. "It was awesome to see him out there," Staal said. ... The announced crowd of 6,014 was a season high for the Stars. Capacity is still limited at American Airlines Center, but not as much as when the season started in January with a crowd of 4,214 — about 22% of the building's hockey capacity of 18,532.

The Stars have three games remaining against the Lightning, the team that beat them in Game 6 of the Stanley Cup Final last September in the NHL bubble. There is also the game at Nashville, and a game at Florida before finishing with two games in Chicago.

There were only three on-ice officials for a short portion of the first period after linesman Jonny Murray got crushed and went down by the boards near the benches when caught in between Carolina defenseman Jake Gardiner and Stars forward Blake Comeau. Play resumed after Murray got up and left the ice for a few minutes before returning.