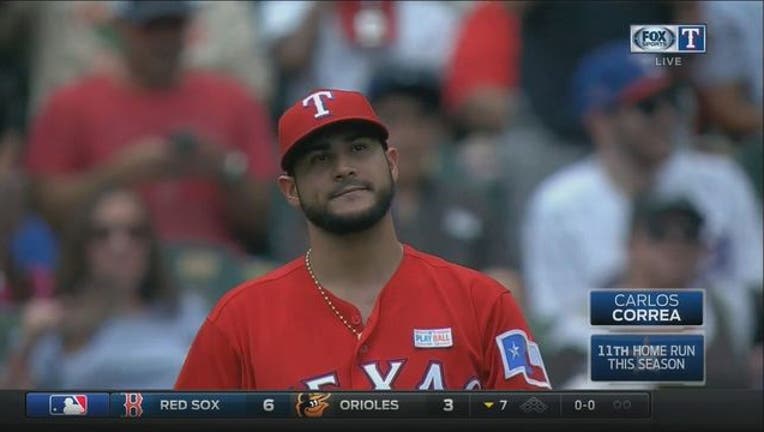 ARLINGTON, Texas (AP) - George Springer hit two of Houston's four home runs and the Astros matched their Texas rival for the longest winning streak in the major leagues this season at 10 games, beating the Rangers 7-2 on Sunday.

The Astros scored in all four innings pitched by Martin Perez (2-6) and tied a club record from 1989 with their 10th straight road win. Houston's first sweep of Texas since July 2014 dropped the Rangers to 3-11 since their 10-game streak.

Defending AL West champion Texas (26-31) is 15 games behind the division-leading Astros, who have the major leagues' best record at 41-16 - and six wins in seven games against the Rangers.

Brad Peacock (3-0) won a major league start for the first time since Sept. 2, 2014, pitching past the fifth inning for the first time in his third start following 12 relief appearances. He struck out nine in six innings, allowing two runs.

Luke Gregerson finished the game in a downpour with scoreless ninth, including a strikeout that gave Houston pitchers 13. The Rangers fanned 31 times over the final two games.

Springer, who had three hits, connected on his sixth leadoff homer this season, matching Tampa Bay's Corey Dickerson for the major league lead, and added a solo shot in the fourth. He has a team-leading 16 homers.

Carlos Correa went deep starting the third, with a fan reaching over the railing with a glove for a nifty grab of the 440-foot drive to a back wall in the visitor's bullpen in left-center field. Yuli Gurriel had another solo homer in the fifth and a sacrifice fly in the third.

A day after striking out four times with runners on base in a one-run loss, Texas' Rougned Odor hit a solo homer when the Rangers were trailing 7-0 in the fifth.

Perez surpassed his loss total at home from all of last season with his fourth Globe Life Park defeat, allowing three homers among seven hits and six runs - five earned - while matching his shortest outing of the year at 3 2/3 innings.

Astros: RHP Joe Musgrove (right shoulder discomfort) won't start Tuesday at Kansas City when he's eligible to come off the disabled list. Manager A.J. Hinch said the club was being cautious and there wasn't any deeper concern about the injury.

Rangers: 1B Mike Napoli was out of the lineup for the third time in six games because of back spasms. Manager Jeff Banister said the spasms recurred during Saturday's game and that Napoli might undergo an evaluation on the off day Monday if there isn't improvement.

Astros: RHP Mike Fiers (2-2, 4.96) starts the opener of a four-game series at Kansas City on Monday. His previous start against Minnesota - a win - was his first without allowing a home run.

Rangers: Texas had not announced a starter for Tuesday's series opener against the visiting New York Mets.