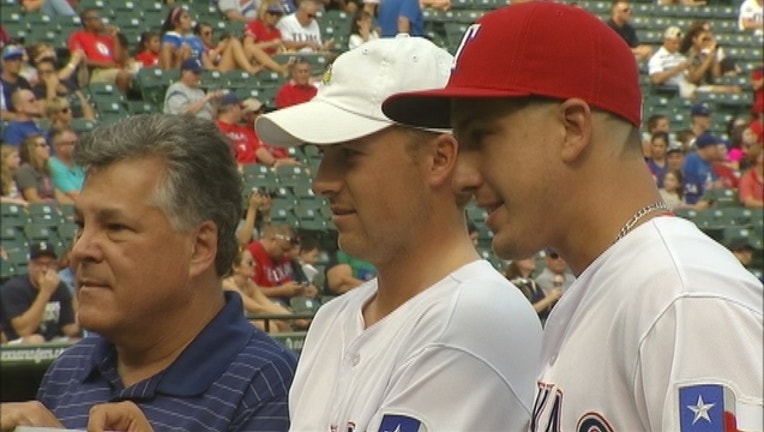 ARLINGTON, Texas (AP) — This time, no clubs for Jordan Spieth and Zach Johnson. Just a pair of famous diamonds.

The golfers each threw out a ceremonial first pitch at a major league game on Tuesday night. They spent much of the day trash-talking on Twitter, finally arriving at a bet of a $5,000 to the major winner with the best result at the ballpark.

"I think we might get a nice Zach Johnson check coming our way," Spieth said after his left-handed pitch at Globe Life Park.

"As long as you don't bounce it, I think it's a success. And got it over the strike zone too, so that was nice."

Speaking before his pitch at Wrigley Field, Johnson said he was more nervous about leading the crowd in the singing of "Take Me Out to the Ballgame" during the seventh-inning stretch.

"I'd like to say my pitching mirrors my game on the golf course, so I'll say over the plate is a good pitch and leave it at that," he said.

The Twitter accounts for the Texas Rangers and Chicago Cubs also got into the act. The Rangers said Masters and U.S. Open winner Spieth threw "a hard strike," and the Cubs posted that British Open champion Johnson "registered 95 on the radar gun."

Spieth was eager to make up for a lackluster first pitch before a Texas game in May 2013.

"It was better than last time," said Spieth, who finished second in the PGA Championship last weekend. "Last time, I was a little weak with it, and just kind of lobbed it in.

"This time I threw some pitches in the cages before and put a little speed on it to try and get ready."

The 21-year-old Dallas native said he had an even worse memory of the stadium from when he was a boy.

"It was either my uncle or my dad, but they were both here, threw a pop fly way up in the air. It was caught in the light, I was looking for it like that," Spieth said, squinting. "And that was how I got my two front teeth knocked out, was at this ballpark."

Johnson, 39, said he is more of a college football and college basketball fan than baseball, and he played a lot of soccer as a kid.

"But when it comes to going to a game, going to a venue, going to the park, it doesn't really compare (to baseball)," he said. "I mean beer and peanuts. I mean I'm a happy camper. My boys are playing it now, so obviously that becomes an element and a part of it. We do lot in the summer, just throwing the ball around in the park."