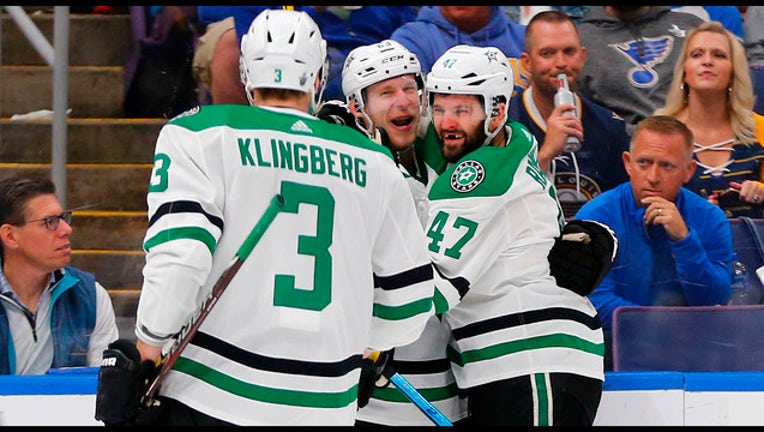 Esa Lindell of the Stars is congratulated after scoring a goal against the Blues in Game Five of the Western Conference Second Round at the Enterprise Center on May 3, 2019 in St. Louis, Missouri. (Photo by Dilip Vishwanat/Getty Images)

Esa Lindell also scored for the Stars, who can advance with a win in Game 6 at home on Sunday.

Jaden Schwartz scored and Jordan Binnington made 25 saves for the Blues, including stops on three breakaways in the first 4:08 of the second period to keep it a one-goal game at the time.

Spezza gave the Stars a 1-0 lead at 2:42 of the first, burying a one-timer from Tyler Seguin. The goal extended Spezza's points streak to three games and he's scored in the last two.

Lindell made it 2-0 with a backhand from the high slot at 6:13 of the second. It was Lindell's first goal of the postseason.

Bishop made a couple of saves during a Blues power play in the second and stopped quality chances from Brayden Schenn and Robert Thomas in the first. But Bishop's giveaway at 8:26 of the third put the puck right on Schwartz's stick, setting him up for a one-timer that pulled the Blues within one.

Bishop redeemed himself late in the third, stretching to get his pad on a point-blank chance for Oskar Sundqvist.

The Blues went 0 for 4 on the power play, giving up several quality short-handed chances to the Stars. The third power play at the end of the second was so futile that it drew hearty boos from the 18,542 at Enterprise Center.

NOTES: The Blues' defense entered the game with 26 points, third in the league behind Carolina and San Jose (27 points each). ... Stars F Mats Zuccarello snapped a career-high four-game postseason points streak. ... Blues D Alex Pietrangelo had points in four of his previous five games and is fourth on the franchise list for career points for a defenseman with 35.

Game 6 is Sunday at Dallas.