SOUTHLAKE, Texas - Inside the football facility at Southlake Carroll, the walls are wrapped with the accomplishments of former players.

The trophy cases are filled to capacity and winning is a habit. But it’s a byproduct of a greater tradition – to coach every boy that comes through the program to become a great teammate.

“The bottom line is how we treat people on and off the field and taking care of our teammates,” said Coach Riley Dodge.

Jack Crafton is as prolific a teammate as the Dragons have ever had.

“Always there for every single person on the team no matter what,” said Jack Edwards, a teammate. “He was easily one of my best friends.”

“Jack is someone that has a huge heart, that loves in a big way and shows it every day,” Coach Dodge said.

Parents Sheila and Adam Crafton moved to Southlake after Jack was born. They wanted him to get involved in the community but Adam wasn’t sure if football was a great idea. Sheila knew he needed the sport.

“My instinct was all the boys are playing football or running and Jack hated to run,” Sheila said.

He quickly fell in love with the game and from day one it was clear growing up with a disability would never stop Jack from being a Dragon football player. 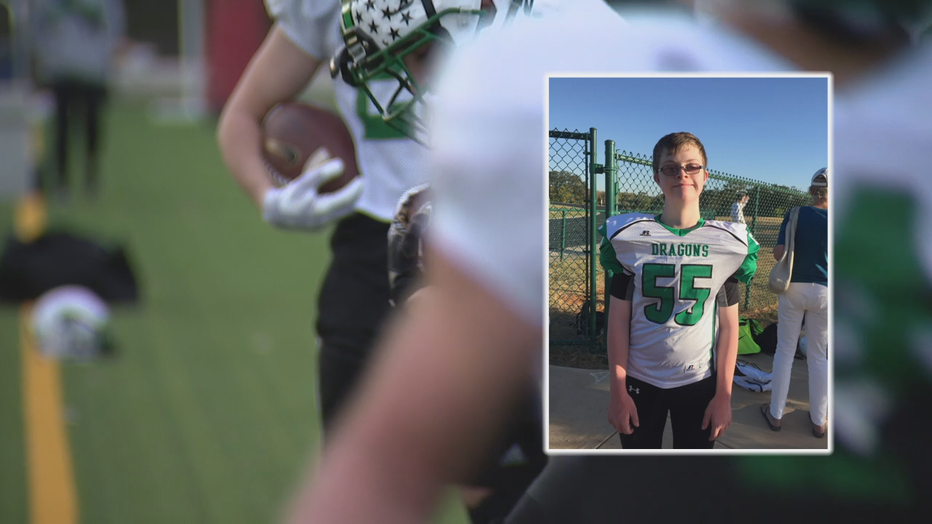 “He just knows things are a little bit harder for him but otherwise he really doesn’t pay any mind to that or discuss that or make that important to him at all.”

“He’s living life, right, just as we do. We have issues. He’s living his life to the fullest,” Adam said.

Nobody spent more time with Jack on the football field than Coach Vernon Coleman.

“He will always have a part of my heart,” Coach Coleman said.

Even though Jack has graduated Southlake now and moved away for college, there’s never a day Coleman forgets about his guy.

“Every day I wake up I've got his picture. His mom gave me a picture at Christmas. Jack and me and his two little siblings. I see Jack every day. Jack never leaves me. I see him every day,” he said.

Most of Jack’s top highlights with the Dragons played out in those Friday night moments that didn’t show up on the stat sheet – confidently leading the team onto the field and charging to the front of the line for post-game handshakes.

He’s also known for making sure Coach Coleman didn’t interfere with his camera time and reluctantly forking over trophies to Coach Dodge.

The Crafton’s watched one game at a time as Dragon football changed their Jack.

“I think it really helped in his confidence with everything else,” Sheila said.

That confidence was undefeated, even with it came to the Carroll cheerleaders.

“Yeah, we had to set a couple of ground rules after the first game,” his parents laughed.

Teammates said he could take away stress in just the snap of fingers at any moment. He’d be pumping up the crowd and his teammates on the sidelines couldn’t help but smile.

Even the final alma mater after losing in the playoffs couldn’t wipe the joy off Jack’s face.

“Even though he knew this was his last game he always kept a giant smile on his face,” Edwards said.

For all the signature sideline moments, there was never a second Jack didn’t want to be in the game.

On senior night after all the practices, workouts, meetings and literally years of showing up just like his Dragon teammates, Jack finally had his number called for a varsity snap.

Jack took the ball heading straight for the house.

“I was like, I think this is why God moved us to Texas right here,” Sheila said.

“To watch a young man that has different struggles than others and to get to see him live out a dream of his is something I’ll never forget,” Coach Dodge said.

A pandemic stood no chance of stopping him from celebrating his graduation from Carroll over the summer.

Now he’s taking his talents to the next level.

“Arkansas’ awesome and amazing. I really love it a lot,” he said.

“Arkansas and a couple other big universities are offering inclusive programs for people with disabilities,” Sheila said. “He has supported classes. He has typical classes with all the university students, lives in a dorm and is fully immersed in the culture.”

Jack’s no longer leading the Dragons onto the field or making sure the cheerleaders don’t get lonely.

But the example he set and the legacy he left behind will be a part of the tradition at Southlake Carroll for years to come.

“That there’s no limitations. There's always a way. That's something that Jack has opened the door for so many more kids coming down the road,” Coach Dodge said. “There’s going to be challenges but I don't think there's any barriers for Jack Crafton. He'll be able to do what he wants to do."