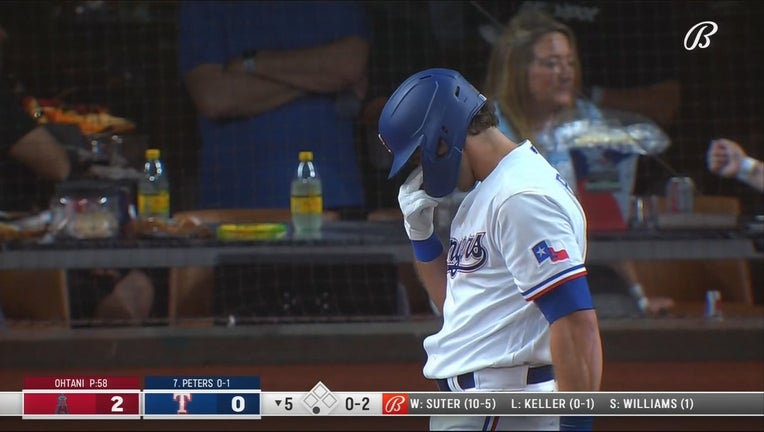 ARLINGTON, Texas - Shohei Ohtani signaled for Juan Lagares to take off from second base on a wild pitch, then the two-way standout just got out of the way when his speedy teammate kept on coming around third.

Lagares gave the Angels the lead for good with his third-inning dash, Ohtani pitched six solid innings and the Los Angeles Angels beat the Texas Rangers 2-1 on Wednesday night.

Jack Mayfield went 3 for 3 while homering from the No. 9 spot for the second consecutive night.

Before Ohtani’s inning-ending groundout in the third, Kolby Allard bounced a pitch past Jonah Heim, who didn’t find the ball near the backstop until the sprinting Lagares was touching third. The catcher’s hurried flip went over a leaping Allard as Lagares slid under the pitcher and clapped his hands after putting LA in front 1-0.

"It was a great aggressive run by him," Ohtani said through an interpreter. "I feel like he should be the MVP of the game for that."

Ohtani (6-1) allowed four hits and struck out six without a walk, losing his shutout in the sixth when a groundout by Adolis García scored Isiah Kiner-Falefa, who lined a leadoff double for one of his three hits.

"Ideally I wish I could have not given up that run in the sixth inning," Ohtani said. "It would have been snice to give the relievers the ball with a two-run lead."

Austin Warren struck out Brock Holt looking with the tying run at third to end the seventh, Steve Cishek pitched a scoreless eighth and Raisel Iglesias got a game-ending double play from Andy Ibanez for his 23rd save in 28 chances.

In his previous outing at Texas in April, Ohtani made history as the first home run leader to start on the mound since Babe Ruth 100 years ago. Now it's becoming routine for the AL All-Star starter, and winner.

The lefty slugger didn't add to his homer total, going 0 for 3 with a towering flyout to right that excited the crowd in Ohtani's final at-bat in the fifth. But the right-hander didn't allow more than one baserunner in an inning.

Entering the game with a first-inning ERA of 8.59, Ohtani had Nathaniel Lowe at third with one out after a double and wild pitch before getting García and Heim on flyouts to right.

"He didn’t have his best stuff but competed really well," manager Joe Maddon said. "He’s got a great feel for everything. Maybe not his most dynamic performance, but highly effective because he knows what he’s doing out there."

Allard (2-10) allowed two runs in six innings but still lost his eighth consecutive start, the most in the same season for a Texas pitcher. It was the left-hander's fewest runs since the last time he didn't lose, a no-decision in mid-June.

"Obviously the wild pitch got away," manager Chris Woodward said. "I don’t mind. He’s obviously trying to keep the ball away from Ohtani and not give him anything to hit. I know he’s had a couple of rough ones in a row, but he was able to kind of right the ship and give us a chance to win the game."

The Angels skipped Ohtani's scheduled start Sunday after he was hit on his pitching thumb by a foul ball into the dugout a week ago. That's part of the reason Maddon pulled him after 86 pitches, one inning short of what Ohtani was hoping.

"I thought he was a little fatigued," Maddon said. "He hadn’t pitched in a while. Just in talking to him, I just thought that was enough. Every game’s a little different experience, but I thought tonight that was the right number for Shohei."

Angels: 3B Anthony Rendon needs season-ending surgery on his right hip, finishing off his injury-plagued year. The 2019 All-Star had been out since July 6 with a right hamstring strain, his third stint on the injured list after knee and groin issues. Maddon said he wasn't sure how the injury progressed from a hamstring to hip issue.

Rangers: RHP Dane Dunning went on the 10-day IL with right ankle impingement. Woodward said Dunning had been pitching through discomfort, and the club hopes he only misses one start. RHP Demarcus Evans was recalled from Triple-A Round Rock two days after the reliever had been sent down.

Angels: RHP Dylan Bundy (1-8, 6.66 ERA) goes in the finale of the four-game series, making his second start since returning from a demotion to the bullpen. One of his losses was to the Rangers, but he has a solid 3.51 career ERA against Texas.