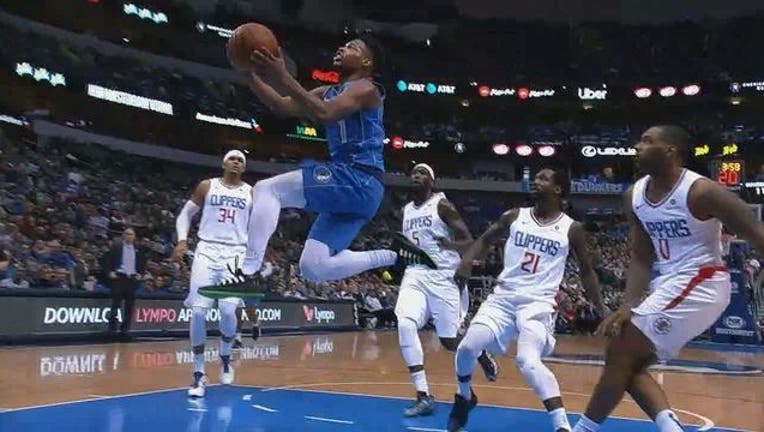 DALLAS (AP) - Dennis Smith Jr. had 17 points and eight rebounds in his return after a week away from the team amid trade talk, and the Dallas Mavericks beat the Los Angeles Clippers 106-98 on Tuesday night.

Smith had two of his four assists on a layup and alley-oop dunk in the fourth quarter for DeAndre Jordan, who had 13 points, 16 rebounds and four blocks in his third game against the team with which the 6-foot-11 center from Texas spent his first 10 seasons.

Rookie sensation Luka Doncic, whose sudden emergence has clouded Smith's future in just his second season with the Mavericks, matched Smith with 17 points, including a key jumper with Dallas hanging on to a late lead in just its third win in 10 games.

Patrick Beverley scored 16 points while Avery Bradley and Lou Williams had 15 apiece for the Clippers, who lost for the sixth time in seven games coming off a win in San Antonio that ended a season-long five-game losing streak.

Harrison Barnes stopped a recent 3-point shooting slump by making three of five from long range, including one for the biggest Dallas lead at nine points with less than a minute remaining. Barnes led Dallas with 20 points.

The Clippers missed 16 straight shots in the second half, including their last 15 of the third quarter. But they still led 88-83 in the fourth before going 4 of 16 to finish the game. They shot 36 percent overall.

Smith and Doncic shared the floor for the final 2:14, with Smith starting that stretch with a long pass to Jordan for the dunk. Soon after, Doncic worked methodically for a jumper for a 101-93 lead with 1:22 to go.

The 21-year-old Smith had missed six straight games. The first three were listed as back tightness, but the last three were officially for illness as trade talk percolated. He missed a two-game road trip and was away from the team for its most recent home game last Wednesday.

The Clippers finished the third quarter shooting 17 percent (4 of 23). Despite the woeful shooting, they were tied at 73-all before Dirk Nowitzki hit a 3-pointer and Devin Harris had a driving layup for a 78-73 Dallas lead going to the fourth.

Nowitzki, in his record 21st season with the same franchise, made two of four from long range and finished with eight points. The 40-year-old played 10 minutes, right on his season average.

Clippers: Williams returned after missing two games with a hamstring issue. He was 5 of 16 from the field, including 1 of 6 from 3. ... Leading scorer Danilo Gallinari missed his second straight game with back spasms.

Mavericks: G Wesley Matthews was 1 of 4 from 3-point range and needs two more from long range to become the first undrafted player with 1,500 career 3-pointers. ... Doncic and Smith struggled from long range, combining to go 1 of 14 with several shots that missed the rim. ... Doncic had seven rebounds and six assists.

Clippers: At Miami on Wednesday, with LA trying to avoid getting swept in two-game season series for second straight year.

Mavericks: Both of this season's meetings with the Pistons are in the coming week, Friday in Dallas and Jan. 31 in Detroit.