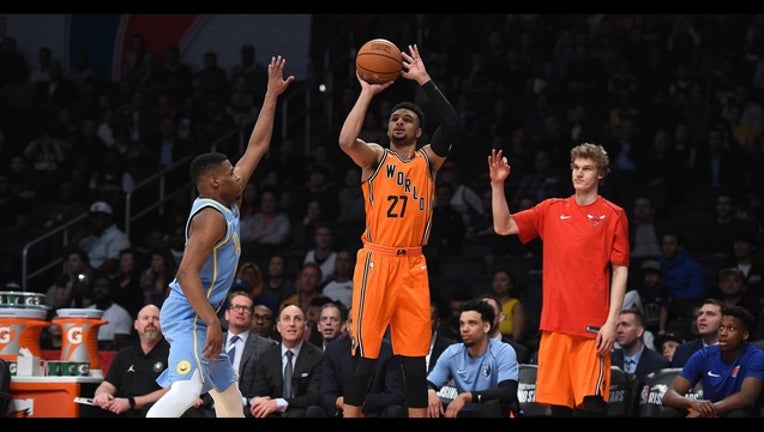 Jamal Murray #27 of the World Team shoots a jump shot over Dennis Smith Jr. #1 of the U.S. Team during the 2018 Rising Stars Game at Staples Center on February 16, 2018 in Los Angeles, California. (Photo by Kevork Djansezian/Getty Images)

LOS ANGELES (AP) - Buddy Hield and Bogdan Bogdanovic got the NBA's All-Star weekend off to a running start.

Hield scored 29 points, and his Sacramento Kings teammate won the MVP award with 26 points and seven 3-pointers in the World's 155-124 victory over the U.S. team in the Rising Stars Challenge on Friday night.

The annual showcase of the NBA's top rookies and second-year players again served as the opening to the three-day All-Star festivities, which are being held in Los Angeles for the record sixth time.

But this show was headlined by two shooting stars from the upstate rivals of the hometown Lakers and Clippers, with Hield and Bogdanovic combining to hit 12 3-pointers.

The 10-man American team struggled to keep up with the 10-man team representing everywhere else, from Canada to Croatia to Cameroon. Eight of the World's 10 players hit double figures, including 21 from Denver's Jamal Murray, the Canadian MVP of this game last season with 36 points.

Hield, who is from the Bahamas, will be sorry to see the end of his eligibility for this game, in which he scored 28 points last season in New Orleans as a rookie with the Pelicans. The sweet-shooting Kings guard hit five 3-pointers.

Bogdanovic, from Serbia, was even better from long range, going 7 for 13 on 3-pointers and even adding six assists to earn MVP honors.

The biggest cheers at Staples Center went to Lakers youngsters Kuzma and Brandon Ingram, who both suited up for the U.S. team. The fans also roared for Lonzo Ball, who was selected for the U.S. roster but unable to play due to his lingering knee injury.

Ingram, who scored eight points, and Kuzma were both playing in their third game in three nights, including a loss at Minnesota on Thursday night. But they were the struggling marquee franchise's only representatives at the latest All-Star weekend in its hometown.

The 16-time NBA champion Lakers (23-34), who also had Larry Nance Jr. in the dunk contest before trading him to Cleveland, are likely to miss the playoffs for a team-record fifth consecutive season.

The Clippers also are lightly represented in LA, with only Lou Williams in the skills competition and newly acquired Tobias Harris in the 3-point contest.

The World had better teamwork from the start, jumping to a 78-59 halftime lead with balanced scoring and nearly 56 percent shooting. Hield and Bogdanovic hit four 3-pointers apiece before halftime.

Joel Embiid provided the third quarter's best highlight with a nimble spin move into a ferocious dunk while the World padded its lead out to 32 points in the third and 39 in the fourth.

The final seconds devolved into an uncontested dunk contest, and the Americans finally had a few highlights. Brown and Atlanta's John Collins both threw down ferocious, acrobatic slams.