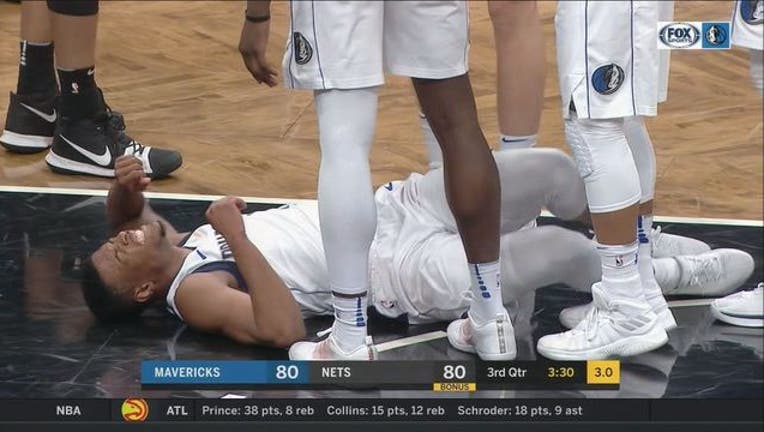 DeMarre Carroll had 19 points and 12 rebounds, and Caris LeVert and Joe Harris each chipped in 11 points for the Nets, who snapped a three-game skid.

Dallas rookie Dennis Smith Jr. scored 21 points but left with 3:30 remaining in the third quarter after spraining his left ankle. Rick Carlisle said after the game that X-rays were negative. Dwight Powell had 18 points and reserve Yogi Ferrell had 12 points and 12 assists for the Mavericks, who dressed only 10 players.

Dallas was also sluggish early after losing in overtime Friday night at Toronto. The Nets took advantage, jumping to an 11-0 lead in the first quarter.

Brooklyn led by 14 points before the Mavericks recovered late in the second quarter, cutting the lead to 59-56 with 9-2 run to end the half.

Smith gave Dallas its first lead of the game in the third quarter with 8:06 remaining, stripping the ball from Russell and dunking to cap an 8-2 run that put the Mavericks ahead 70-68. Dirk Nowitzki later hit a 3 and Smith followed with a pull-up jumper to put the Mavs up 80-70 with 5:36 left before Brooklyn charged back.

Nowitzki played in his 1,463rd game, moving past Kevin Garnett into fifth place in the NBA career list. The 39-year-old Nowitzki, who last summer signed on for two more years with the Mavericks, also played Friday night in Toronto and has played in 10 back-to-back sets this season.

Mavericks: Veteran guard J.J. Barea was inactive due to a left rib muscle strain. Forwards Nerlens Noel and Harrison Barnes were held out to rest.

Nets: Guard Allen Crabbe (illness) was ruled out. He was replaced in the starting five by reserve Joe Harris. ... Have eclipsed 30 points in the first quarter of their last three games. ... F Dante Cunningham was held out due to a concussion he suffered Friday night in Philadelphia.

Mavericks: Close out their four-game trip at New Orleans on Tuesday.