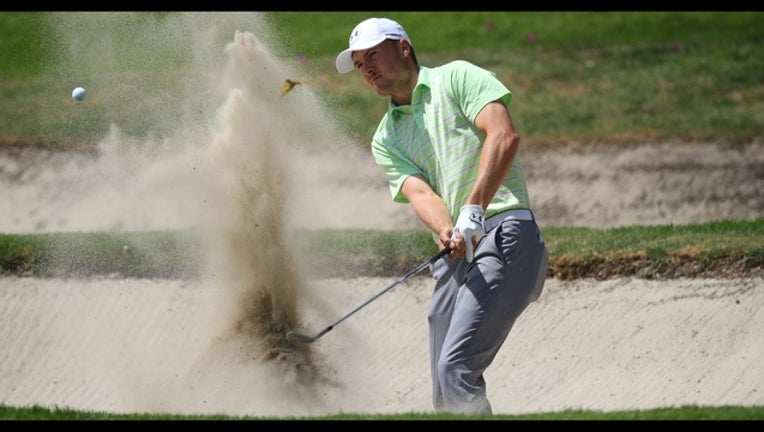 Jordan Spieth plays his second shot from a bunker onto the first green during the third round of World Golf Championships-Mexico Championship at Club de Golf Chapultepec on March 3, 2018 in Mexico City, Mexico. (Photo by Gregory Shamus/Getty Images)

PALM HARBOR, Fla. (AP) - Jordan Spieth feels as though he has been playing catch-up all year.

Spieth had a memorable offseason when he proposed (successfully) to longtime girlfriend Annie Verret. What suffered were his preparations for a new year after a bout with mononucleosis. He lost weight. More importantly, he lost time.

That's one reason he was on the fence about his schedule leading up to the Masters. Spieth didn't firmly decide to play in the Mexico Championship until the last minute, and that briefly made him rethink whether to play the Valspar Championship, which he won three years ago.

Ultimately, he did both.

"I was trying to figure out what was the best strategy to be as rested and prepared for Augusta," Spieth said. "I just wasn't sure. I haven't had a whole lot of rest."

His December can be understated, much like the time it took Dustin Johnson to fully recover from his back injury before the Masters last year.

Spieth is playing his sixth tournament of the year at the Valspar Championship, but part of him feels like it's January. All because of December, when he said he had only four one-hour practice sessions.

"I probably lost a full month, month-and-a-half out of it," Spieth said. "The problem was in that time coming back, the basic stuff after you take a couple of weeks off ... is the time you figure out all the basics: the ball position, the alignment issues. And then I was starting to have those problems, especially in the short game, while I was having to play tournaments. And so it adds to that frustration level."

It hasn't been a total flop. Spieth has had only two rounds over par, in the opening round of Kapalua and Phoenix. While he missed the cut in Phoenix, his worst other finish was a tie for 20th at Pebble Beach.

"I feel like right now my game is in the shape it would be after playing a couple of events," he said in Mexico. "The progression of that last three-week stretch (Phoenix, Pebble, Riviera) is the progression I normally experience the first few weeks of the year."

After the Valspar Championship, he is off next week before Match Play, the Houston Open and the Masters.

TIGER TIME: Tiger Woods is playing the Valspar Championship for the first time, meaning there are nine events on the PGA Tour schedule (excluding the opposite-field events) he has never played.

One of them only began this year, the CJ Cup in South Korea.

Two others in the fall have only been around for about a decade: the OHL Classic in Mayakoba began in 2007, and the RSM Classic in Sea Island dates to 2010.

The other events are the Zurich Classic in New Orleans, the Sony Open in Honolulu, and the CareerBuilder Challenge in the California desert.

OVER-CONFIDENCE: Dustin Johnson started the year with four wedges, and now is down to three. The 2-iron has replaced the 64-degree sand wedge.

Attribute that to being over-confident - and perhaps too reliant - on the 64-degree wedge.

"I felt like I was getting just a little bit lazy with shots into the green because I had a 64 in my bag and I felt like I could hit it anywhere and get up-and-down," Johnson said last week in Mexico. "I don't know if I was actually doing that. Maybe I was just hitting it bad enough that I was hitting it everywhere.

"But yeah, I just went back to what I normally play with."

SOUTH AFRICAN HOLIDAY: Imagine driving for 1,500 miles with 12 adults and 12 children to reach a desert, then spending six days sleeping in tents. Louis Oosthuizen wouldn't miss it, a time to recharge over the holidays in South Africa.

For the last six years, Oosthuizen packs up family and friends and heads for the Namib desert, which stretches some 1,200 miles along the Atlantic coast. The only communication they have with the outside world is a satellite phone. They require two guides to drive them in and out of the desert because of the heavy dunes. When they aren't riding four-wheelers, they are fishing for dinner.

He said the whole trip takes 11 days, which includes travel there.

"What makes it difficult is the week I come back is always the South Africa Open," he said. "It's a tournament I want to play, but it's a trip I can't miss."

OPEN QUALIFYING: The Bear's Club and Portland Golf Club are among 12 qualifying sites for the U.S. Open this year.

Portland Golf Club has not held U.S. Open qualifying since 1998. The Bear's Club is the home of Jack Nicklaus, and several PGA Tour players are members.

The other sites are Lake Merced and Olympic Club in San Francisco; Ansley Golf Club near Atlanta; Woodmont Country Club in Maryland; Canoe Brook in New Jersey; Brookside and Lakes in Columbus, Ohio; Springfield, Ohio; Ridgeway and Colonial in Memphis, Tennessee; and Shadow Hawk near Houston.

DIVOTS: Korean-based Mediheal is the new title sponsor of the LPGA Mediheal Championship at Lake Merced Golf Club just outside San Francisco on April 25-29. The LPGA previously was there when it was sponsored by Taiwan-based Swinging Skirts. ... Jon Rahm and his sponsors contributed $63,000 to the Mexican Red Cross for relief from the earthquakes. Rahm pledged $1,000 for every birdie and made 21 of them in the Mexico Championship. Two of his sponsors, Isagenix and Unifin, matched his donation. "Hopefully, I'm opening the door for more people who have the chance to donate and maybe help out the country," he said. ... Two of caddie Jimmy Johnson's previous employers won last week: Steve Stricker on the PGA Tour Champions and Michelle Wie on the LPGA. His current boss, Justin Thomas, lost in a playoff. ... Sheshan Golf Club in Sheshan, China, which hosts the HSBC Champions, was selected to hold the Asia-Pacific Amateur Championship in 2019. It will be played the last week in September.

STAT OF THE WEEK: Sixteen players at the Mexico Championship were not even born when Phil Mickelson won the first of his 43 titles on the PGA Tour.

FINAL WORD: "You miss sometimes the cheer of the crowds." - Lorena Ochoa, after playing two holes in a practice round with Jordan Spieth in Mexico.