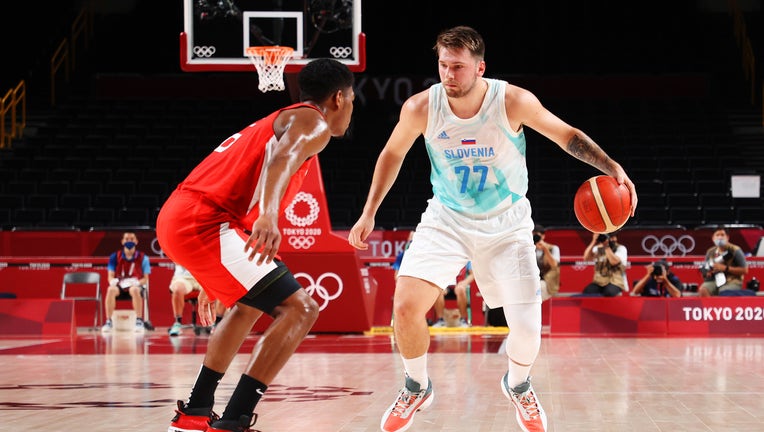 Luka Doncic #77 of Team Slovenia brings the ball up court against Japan during the first half of a Men's Preliminary Round Group C game on day six of the Tokyo 2020 Olympic Games at Saitama Super Arena on July 29, 2021 in Saitama, Japan. (Photo by Gr

SAITAMA, Japan - SAITAMA, Japan (AP) — Rui Hachimura did whatever he could. Blocking shots, hitting tough jumpers, logging big minutes, the best player on Japan’s roster simply held nothing back with hopes of giving his country its first Olympic men’s basketball win in 45 years.

Problem was, the other side had Luka Doncic.

The Dallas Mavericks star had another impressive performance with 25 points, seven rebounds and seven assists in 26 minutes, Zoran Dragic scored 24 points and Slovenia remained unbeaten in its Olympic debut by beating Japan 116-81 in the Tokyo Games on Thursday.

Vlatko Cancar added 16 for Slovenia, which has won its two games in Saitama by a combined 53 points. Slovenia outrebounded Japan 54-33 and had 27 assists to Japan's 15.

"It was a great game for us," Slovenia coach Aleksander Sekulic said. "I think we showed our power. We played really together as a team. To have 27 assists and 54 rebounds, it says something about this team and I'm really proud of them."

"Congratulations to Slovenia," Japan coach Julio Lamas said. "They played better than us, all the game. ... They are a very good team, very complete team with one amazing player."

The Hachimura vs. Doncic matchup got off to a flying start, both players finishing the first quarter with 13 points and Slovenia taking a 29-23 lead after the opening 10 minutes.

The margin was up to 53-41 at the half, and Japan still seemed to have a shot early in the fourth down by only 14.

And then Doncic returned, ending whatever hope the hosts had.

Doncic who declined to stop for questions after the game, didn’t play in the final 5:30 of the third quarter. He grabbed a seat at the end of the Slovenia bench, draped towels over his shoulder and lap and kept them there until he checked back in early in the fourth. His first possession: a stepback 3-pointer from the left wing that dropped, putting Slovenia up 83-66 with 9:14 remaining.

"He's our main guy," said Dragic, the younger brother of Miami Heat guard Goran Dragic. "But we have so many other players who can play with him. We let him do whatever he wants and the other players are trying to support him. We know what he can do. Obviously, we are very successful like this and we're just going to keep on going."

Slovenia outscored Japan 20-7 in Doncic’s final shift of the game, and when he checked out for good all doubt was gone — the lead was 100-73.