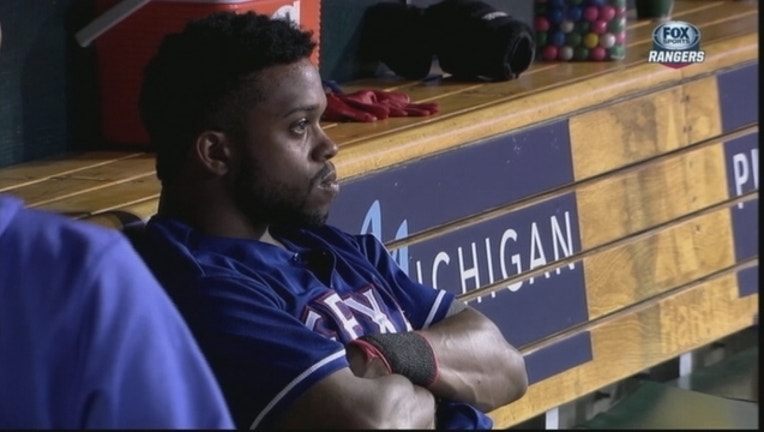 DETROIT (AP) — Alfredo Simon threw a one-hitter in his first career complete game and the Detroit Tigers beat the Texas Rangers 4-0 on Thursday night in a matchup of AL wild-card contenders.

Texas entered play 1½ games behind the Los Angeles Angels for the second wild-card spot, while the Tigers were three games further back.

The Rangers' only hit came with two outs in the fifth, moments after first baseman Victor Martinez had made a diving stop to rob Mitch Moreland of a base hit. Rougned Odor ended the no-hitter with a double to left, but Texas never got a runner past second base.

Simon (11-7) walked two and struck out five. He threw 116 pitches, three short of his career high.

Martin Perez (1-3) took the loss for Texas, giving up three runs, six hits and three walks. He struck out four.

The game marked Prince Fielder's first game at Comerica Park since he was traded to the Rangers after the 2013 season, and he was loudly booed in every at-bat. Fielder, who grew up at Tiger Stadium and helped Detroit to the 2012 World Series, left after angering the fans with what was seen as a too casual attitude to the Tigers' loss to Boston in the 2013 ALCS.

The Tigers loaded the bases off Perez in the first and third innings, and both times, Nick Castellanos drove home Miguel Cabrera with the only run of the rally. In the first, one night after hitting a grand slam in Chicago, Castellanos singled, and in the third, he hit a sacrifice fly to right.

Cabrera made it 3-0 in the fifth, driving in Ian Kinsler with a single, while Martinez added a sacrifice fly in the seventh.

Rangers: The Rangers placed OF Josh Hamilton on the 15-day DL with knee inflammation, retroactive to Aug. 16, and purchased the contract of OF Will Venable. Hamilton had missed four straight games, and a cortisone shot didn't provide any relief.

The teams continue their four-game series Friday with Justin Verlander (1-5, 4.11) of the Tigers facing Colby Lewis (13-5, 4.49). Both pitchers started when the teams faced each other in the 2011 ALCS, but they didn't face each other. Despite Verlander's lack of wins — the Tigers are 2-9 in his 11 starts — he has allowed one earned run in five of his last seven outings.