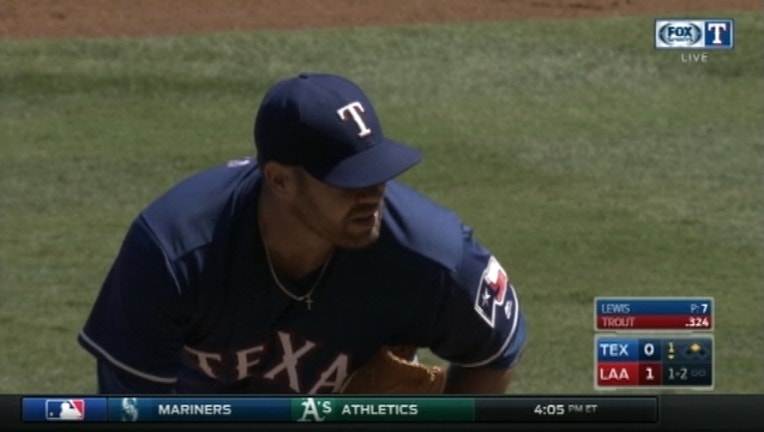 Simmons began the day with only one homer this season. Yunel Escobar hit a leadoff home run in the first inning for the Angels.

Adrian Beltre hit two home runs for the AL West-leading Rangers. It was his fourth multihomer game of the season and the 31st of his career.

Andrew Bailey pitched a perfect ninth to earn his third save. He was released by the Phillies on Aug. 6 and signed by the Angels a week later.

Colby Lewis (6-2), making his first start since going on the disabled list June 21 with a strained lat, gave up all three homers in 5 1/3 innings.

Simmons connected in the second inning and again in the sixth. It was the third multihomer game of his career.

Beltre homered in the second and the sixth.

Weaver, who turns 34 on Oct. 4, will become a free agent at the end of the season.

No longer the hard thrower from his youth, he has reinvented himself as a control pitcher who seldom hits 90 mph with his fastball. It all worked well enough against the Rangers, his off-speed stuff continually keeping them off-balance. He struck out Rougned Odor in the first with a 68 mph curveball.

Rangers: RHP Tony Barnette, the 32-year-old rookie who's become an unexpected key cog in the bullpen, has not pitched since Sept. 4 because of a mild oblique strain. Manager Jeff Banister said the injury was not serious enough to warrant a stint on the disabled list.

Angels: RHP Matt Shoemaker, readmitted to the hospital Saturday after feeling pressure in the area where he was hit in the head by a line drive a week ago, was discharged Sunday after an additional CT scan. He had emergency brain surgery to relieve swelling in Seattle on Sept. 4.

Rangers: LHP Martin Perez (10-10) is scheduled to make his team-high 30th start of the season Monday when the Rangers open a three-game series in Houston. Perez has gone at least five innings in each of his previous 11 starts.

Angels: RHP Ricky Nolasco (5-13) is slotted to start for the Angels when the Mariners open a three-game series in Anaheim Monday. Nolasco is 1-5 with a 4.30 ERA in his first seven starts with the Angels since acquired from the Twins Aug. 1.