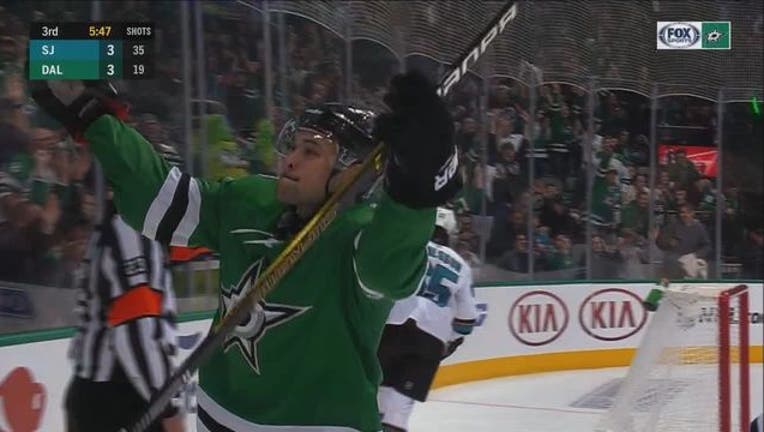 DALLAS (AP) - Devin Shore scored his second goal of the game to break a tie, Anton Khudobin tied a season high with 33 saves and the Dallas Stars beat the San Jose Sharks 4-3 on Thursday night.

Dillon Heatherington's shot from the left point went off a defender's leg to Shore in the left circle, and he beat Sharks goalie Martin Jones with 5:47 to play.

Khudobin stopped a breakaway by Joe Thornton with just over a minute left.

San Jose tied it at 3-3 with 12:14 left to play. Burns' pass went to Kane at the edge of the right faceoff circle. Kane half-whiffed on the shot, but it went behind defenseman Julius Honka and slid past a screened Khudobin.

The Sharks also tied it 1-1 in the first period on Meier's 12th goal of the season.

Shore opened the scoring at 8:57 when Seguin passed to him in the left faceoff circle, and he lifted wrist shot into the upper left corner of the net.

Seguin and Smith scored 45 seconds apart in the second period. Seguin intercepted a pass in the slot and fired a wrist shot past Jones at 6:57. On the next possession, passes by Miro Heiskanen and Jason Dicksinson created an easy tip-in by Smith.

Pavleski redirected a shot by Burns to get the Sharks within 3-2.

NOTES: Meier moved into a tie for the league lead with his 12th goal. He has scored in 11 of 13 games (11 goals, 5 assists, 16 points). ... Thornton played in his 1,500th game in 21 seasons, including 14 with San Jose. He is among 19 to reach that total. The only current player who has played more is his former Sharks teammate Patrick Marleau, now with Toronto. Thornton's assist on the goal by Pavelski was his 1,032nd, one behind Mario Lemieux for 11th all-time. ... RW Denis Gurianov, the Stars' top draft pick in 2015, was recalled from Texas of the American Hockey League and played in his second NHL game. ... The officiating crew was one short because linesman Darren Gibbs was ill.