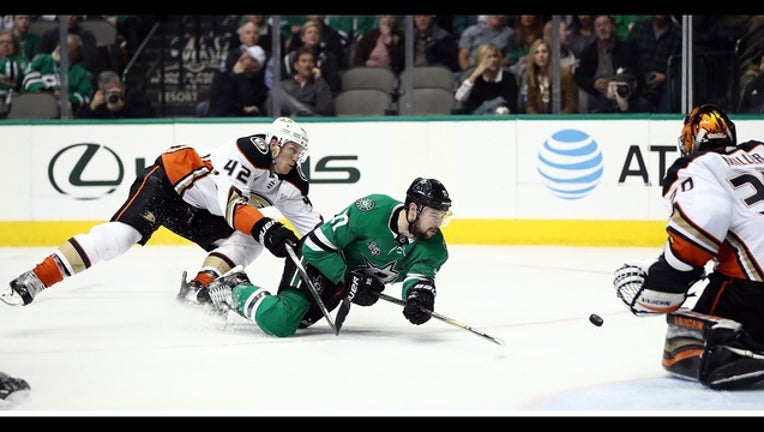 Devin Shore #17 of the Dallas Stars skates for the puck against Josh Manson #42 of the Anaheim Ducks during the third period at American Airlines Center on March 9, 2018 in Dallas, Texas. (Photo by Ronald Martinez/Getty Images)

With the game tied at 1, Benn tipped John Klingberg's shot from the top of the slot past Anaheim's Ryan Miller for the go-ahead goal with 5:37 remaining.

Both teams entered with 80 points, but Dallas increased its lead for the first wild card from the Western Conference to three points over Los Angeles. Anaheim remained one point ahead of the Kings for third place in the Pacific Division.

Miller made 35 saves 16 days after shutting out the Stars with 41 saves in Anaheim. Kari Lehtonen stopped 26 shots for Dallas.

The third-period power plays were the only ones for the Stars in the game. The Kings had killed all 25 of their opponents' man advantages in the previous nine games. Dallas had been successful on only four of 36 power plays (11 percent) over 13 games.

Getzlaf scored at 17:16 of the first period. Rickard Rakell started the play by passing out to Corey Perry at the Ducks' blue line. Going 2-on-1 against Dallas defenseman Greg Pateryn, Perry dropped the puck to Getzlaf entering the Stars' zone. Pateryn went to the ice to block a shot, but Getzlaf lifted a wrist shot over Pateryn and Lehtonen's right shoulder into the upper-left corner of the net.

Anaheim outshot Dallas 10-9 in the first period, but the Stars came out firing in the second. They peppered Miller with 17 shots on goal to just five for the Ducks. Miller stopped all of them.

The Stars finally scored on their first power play of the game. Just 2 seconds were left on a penalty to Perry when Tyler Seguin passed into the slot and Shore deflected the puck into the upper-right corner.

NOTES: The Stars had no healthy scratches. The players sidelined were D Martin Hanzal (lower-body injury), G Ben Bishop (knee) and C Mattias Janmark (illness). Bishop will make Dallas' longest trip of the season and may be able to play before the team returns home on March 23. Dallas C Martin Hanzal will undergo season-ending spinal fusion. ... Getzlaf has two goals and 10 assists in his last five games. ... Rakell played in his 300th NHL game. He celebrated with an assist on Getzlaf's goal, giving him eight goals and 11 assists in a six-game point streak. ... Dallas' penalty killers were 19 for 20 in the previous five games, and 3 for 3 on Friday. ... Seguin assisted on both goals.

Ducks: Begin a four-game homestand on Monday against St. Louis

Stars: Begin a six-game trip on Sunday at Pittsburgh.