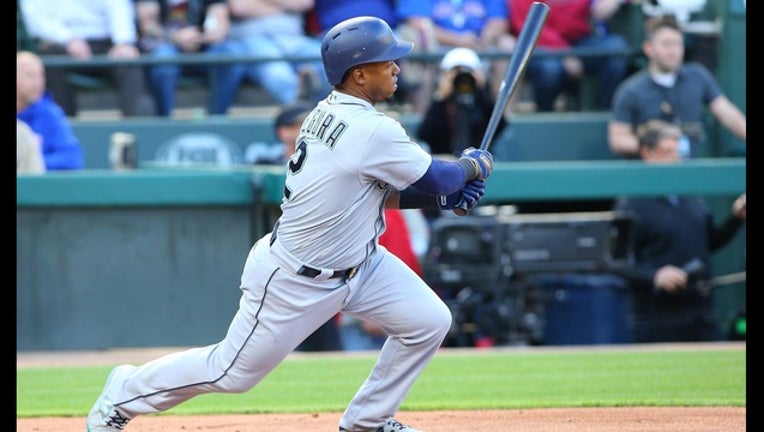 Jean Segura #2 of the Seattle Mariners hits in the first inning against the Texas Rangers at Globe Life Park in Arlington on April 20, 2018 in Arlington, Texas. (Photo by Rick Yeatts/Getty Images)

ARLINGTON, Texas (AP) - Jean Segura hit a two-run double in a four-run ninth inning after Mitch Haniger's tying homer in the eighth, lifting the Seattle Mariners over the Texas Rangers 6-2 on Friday night.

The liner to right center from Segura chased Texas closer Keone Kela (2-1), who gave up singles to Daniel Vogelbach and Dee Gordon and got his only out on Guillermo Heredia's sacrifice bunt.

Haniger's fifth homer was a two-out shot to the berm in center field against Chris Martin. Haniger and Kyle Seager added RBI singles in the ninth off Jake Diekman as the Rangers remained the only team in the majors without a win in a series opener, dropping to 0-7.

Juan Nicasio (1-0) pitched a scoreless eighth, and Edwin Diaz struck out two in the ninth around a walk and a hit batter.

Nomar Mazara hit a tying single and scored the go-ahead run on a fielder's choice by Ronald Guzman in the sixth for Texas.

Texas lefty Mike Minor, trying to become the first pitcher in the 24-year history of the Rangers' home ballpark with three straight starts allowing three hits or less, gave up six hits and a run in 5 1/3 innings with six strikeouts.

There were three defensive gems among the first four outs. Texas shortstop Jurickson Profar made a diving stop and quick flip to Isiah Kiner-Falefa on Cano's run-scoring groundout. The next out came on center fielder Drew Robinson's diving catch in right center on Nelson Cruz's soft liner. Leading off the bottom of the first, Haniger caught Choo's high fly just as he crossed the foul line in right and ran into the wall below the foul pole.

The Rangers held a moment of silence before the national anthem for former first lady Barbara Bush, who died Tuesday in Houston. Former president George W. Bush, one of her sons, once was part of Rangers ownership, lives in Dallas and attends several home games every year.

Mariners: C Mike Zunino matched his career high with four strikeouts in his season debut after missing three weeks with a strained abdominal muscle. ... 1B Ryon Healy (sprained right ankle) started a rehab assignment with Double-A Arkansas on Friday and could return during the 10-game trip that just started.

Rangers: RHP Doug Fister (right hip strain) threw a 58-pitch bullpen session without any issues. Fister was eligible to come off the disabled list Friday. ... CF Delino DeShields was expected to play at least seven innings on the second night of a rehab assignment with Double-A Frisco on Friday. He broke his left hand March 30 against Houston. ... Profar was cleared from the concussion protocol after missing two games when he was upended at second base by Tampa Bay baserunner Mallex Smith on Monday.